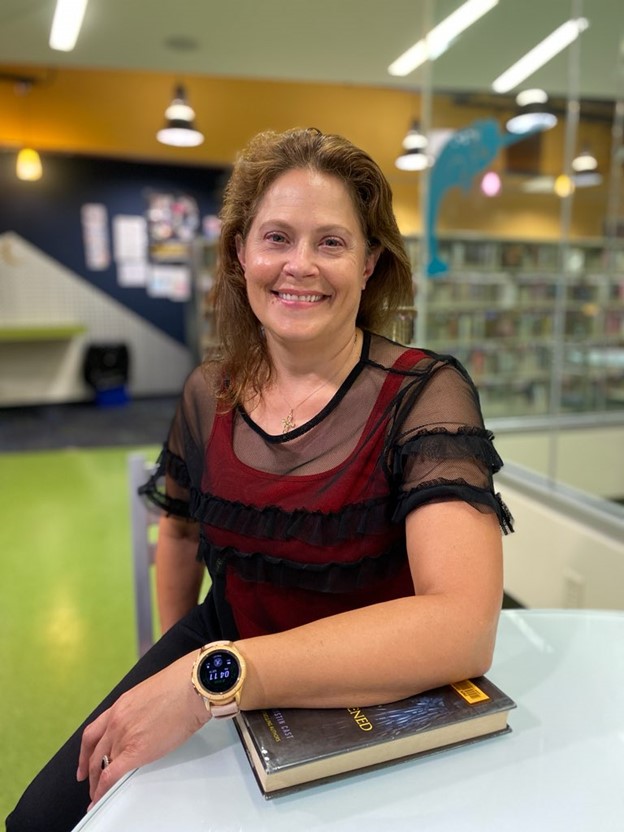 Diana Estell earned her B.A. in anthropology in 2007 and now has published her first fantasy novel through Brimstone Fiction.

Diana Estell’s late father's wish was for her to earn a college degree. When he died in 1988, his passing lit a fire in her to pursue her education.

Years later, even though Estell was much older than a typical college student and a mother of two young children, she decided it was time to try.

“I had always wanted to study anthropology and was impressed by NIU's anthropology program,” she said, noting that anthropology and archaeology were interests she always shared with her father. “In the early '90s, I met my husband at NIU when he was studying for his master's degree and I was attending classes at a nearby college. He earned his master’s degree from NIU and that positive experience influenced my decision to enroll there.”

When Estell enrolled at NIU, she juggled her family responsibilities and her courses, relying on a neighbor to get her first-grade daughter on the bus for elementary school each day.  Her younger daughter, who was 3 years old at the time, attended the NIU daycare program on campus, which proved to be a huge bonus.

“My youngest daughter attended the NIU preschool while I attended courses on the DeKalb campus, and she still has fond memories of being in the program,” Estell recalled. "My priority was always my children's safety first. I knew my daughter was safe and loved and taken care of at NIU's program, so I was able to focus on my classwork."

With days full of classes and family needs, she often squeezed assignments, papers, and study groups in at odd hours.

"When I came home, I was a mom and wife first. Those rules don’t change just because you're pursuing another goal," she said.  "I had to cook and help the kids. My youngest was of the age where, if she was quiet, I worried why she was quiet.  So, I learned to work when they fell asleep at night."

Diagnosed with ADHD late in her life, Estell had always struggled with her schoolwork. Her high school grades often didn't reflect all that she knew and, at that time, she didn't understand why it was so hard. In college, though, Estell's professors thought outside the box, helping her to find ways to succeed while being flexible in schedule and in methods of learning for her unique situation.  Seeing their mother's hard work made an impression on Estell's daughters that it is important to finish what you start.

Estell earned her B.A. in anthropology in 2007 and, at graduation, felt immense pride for what she was able to accomplish.

“I was a full-time mom for many years,” she said. “Along the way, I began to write and eventually completed my first novel.”

This led Estell down the long, rejection-laden road of publishing, as she attempted to pitch her fantasy ideas to choosy literary agents and publishing houses through the personal process of querying. In November 2020, Estell's young adult fantasy novel Abyss of the Fallen, was published by Brimstone Fiction. With this, she accomplished a goal more than 10 years in the making.

“NIU helped broaden my world view and gain new perspectives on a variety of topics,” Estell said. “The professors were great resources of knowledge and encouragement during my time on campus. Dr. Dan Gebo, Sibel Kusimba and Dr. Michael Kolb were the anthropology professors that had a significant impact on me, and I have kept in contact with them long after my studies at NIU were completed.”

She credits her University experience with giving her the confidence and perspective to go after what she had wanted for years.

“NIU prepared me to be a professional writer by developing my critical thinking and world-building skills through anthropological research,” she said. “The challenging writing assignments helped me develop as a writer and storyteller.”

Estell noted that, no matter what area of study a student chooses to pursue, she believes NIU will prepare them to be the best person they can be. As she enjoys her first literary success, she is proud that she not only fulfilled her father’s wish but went above and beyond to achieve more.

“Regardless of your age or background, you can pursue your dreams and achieve your goals,” she said.