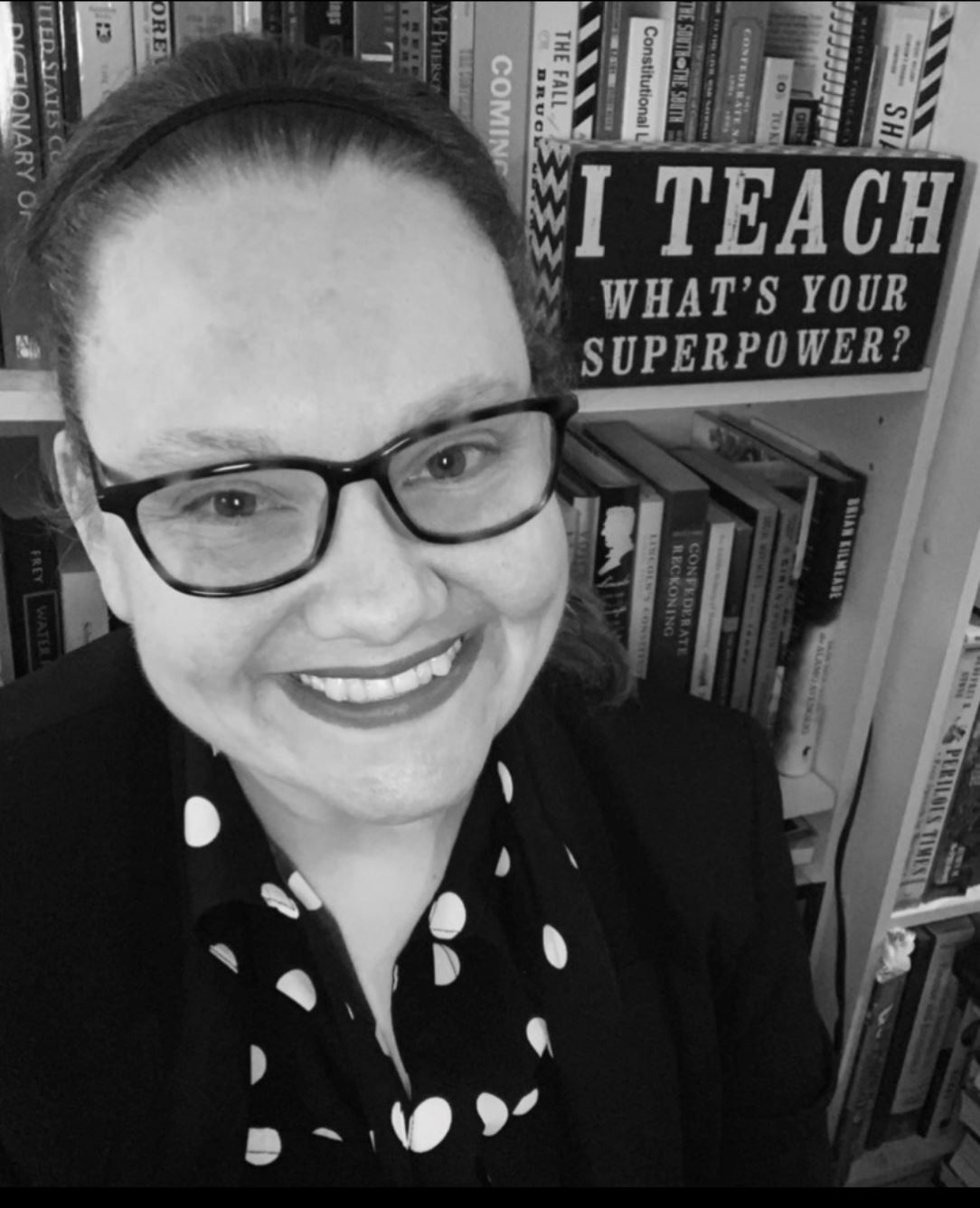 Victoria Bryant Stewart, Ph.D. '17, M.A. '18, received the Excellence in Teaching award from the National Society of Leadership and Success.

Victoria Bryant Stewart, Ph.D. ’17, M.A. ’18, was truly surprised when she received the Excellence in Teaching award from the National Society of Leadership and Success for her role as an assistant professor of history at Northwest Florida State College.

After teaching for years, 2020 proved to be a particularly difficult year. Like many educators, Stewart found herself struggling to learn new ways of teaching to help her students learn, but she was not always certain these new methods were working.

“One of my students told me that I had won this award after he had helped nominate me by writing an essay of support,” Stewart said. “Amid everything going on, it was particularly rewarding and humbling for me to receive this award this year. When I thought I was struggling, students saw me as thriving to ensure they received their education. During the online awards ceremony, students read from their submitted essays of support. I was touched that students recognized my hard work and effort to continue to help them succeed.”

Stewart’s dedication has always stood out. Her credentials are impressive, having earned an associate’s degree from Moraine Valley Community College, a B.A. in history from St. Xavier University, and an M.A. in history from Western Illinois University before completing her Ph.D. in history and master’s in political science at NIU.

Then, when Stewart was an undergraduate, she traveled with the International Scholar Laureate Program to the People’s Republic of China, and for several weeks, she was able to see historic sites and meet with other college students. This cemented her area of study—history and government.

She started teaching college classes in 2014 at several community colleges and universities around the DeKalb, Illinois, area as she finished her Ph.D.

“I was very fortunate to teach many incredible students who taught me how to effectively communicate content while expanding my own understandings of history,” Stewart said. “Their questions would often make me think of things in new ways. I really believe I learned from them as much as they learned from me.”

Stewart was also a teaching assistant with the NIU School of Art and Design and NIU History Department during her time on campus, as well as an Illinois Regional Archives Depository intern for the Regional History Center.

“Working with records and patrons in the archives and learning about art history as I attended those lectures allowed for enriching and rewarding experiences,” she recalled. “I have created and fostered long-standing friendships from these experiences. While I may not have been an art major, my love of history allowed me to bring a new element into those art history courses. The support and constant encouragement of the archivists at the Regional History Center and the professors in the NIU School of Art and Design allow me to remember some excellent memories of my time at NIU. I taught some really fun students at NIU, too!”

Stewart now teaches American history, American government and world civilization courses at Northwest Florida State, and she has had experiences teaching traditional courses, hybrid courses and fully online courses. She arrives hours early before her classes for office hours or committee meetings, and she is usually the first to arrive and the last to leave campus from her department. In her role, she supervises the adjunct instructors, ensures the faculty meets deadlines and serves as a sounding board if there are student issues or concerns.

But it is Stewart’s way of connecting to students that is most extraordinary. 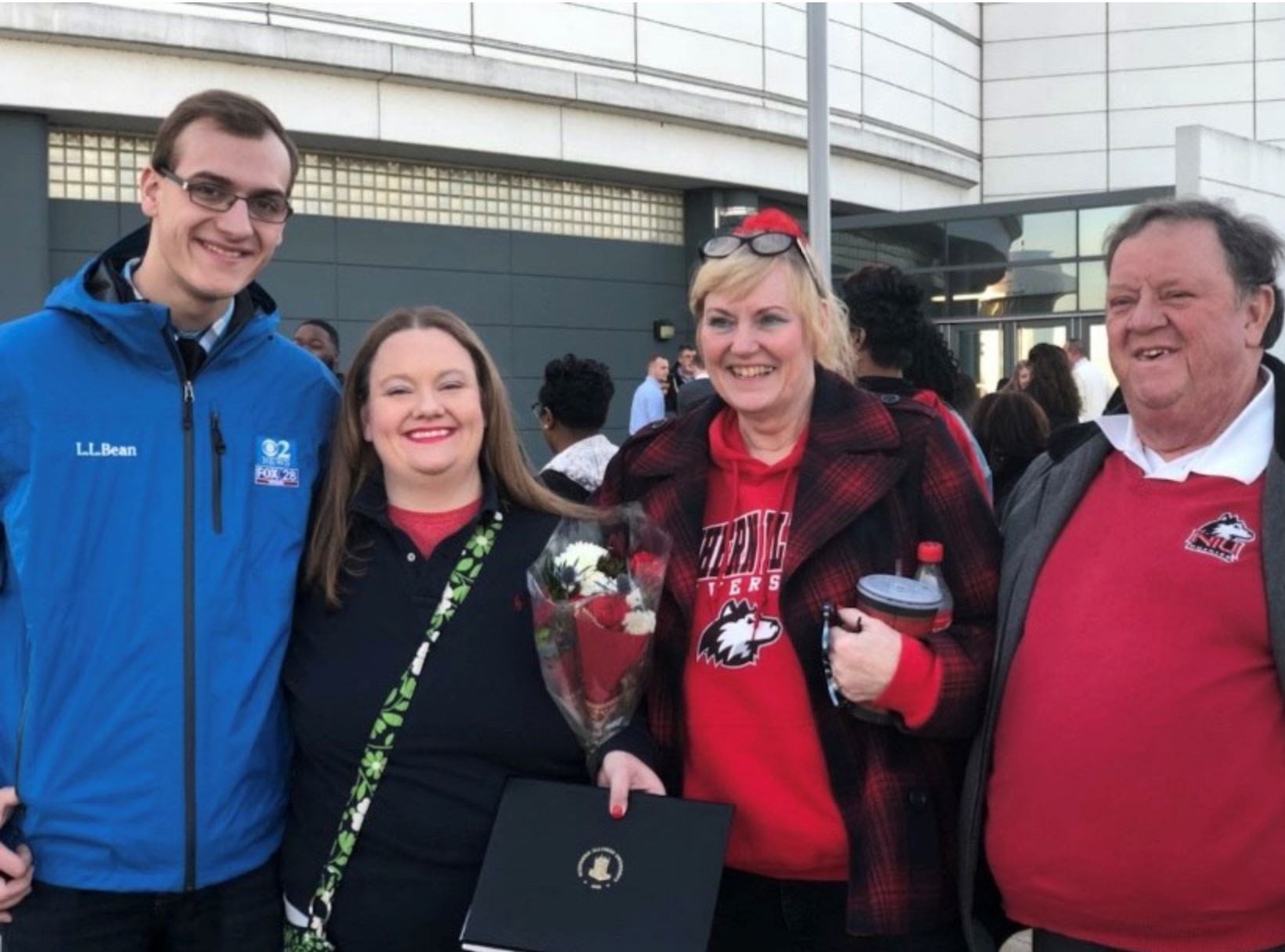 Victoria Bryant Stewart (second from left) and her family attend her graduation at NIU.

“While most students start my class because it is a requirement for graduation, many students find a new appreciation for the subject matter by the end of the semester,” she said. “Once students see how history and government still touch our daily lives, they understand its importance and the need to learn the course content.”

A lifelong learner, Stewart jumps at the chance to have new experiences and dig into new subjects. Her loves of travel and learning are often “contagious” to those around her. In particular, she has become interested in visiting presidential libraries, having traveled to President Truman’s, President Carter’s, President Ford’s, President Lincoln’s, and President Hoover’s libraries.

“I wrote President Jimmy Carter several years ago,” she said. “In my letter, I thanked him for his service during and after the presidency as I explained how I teach about him in my classes. He wrote me a brief note that I’ve since framed!”

Stewart prides herself on being able to create interesting and engaging material for students about any subject.

“I have created a lecture series of videos that I call ‘virtual field trips,’ where I explain historic sites and historical events,” she said. “While they may seem to be a strange set of videos, I can turn anything into a teachable moment. For example, for one lesson, I explained the process of flash-freezing foods while walking down the aisle of the grocery store!”

While Stewart has already accomplished so many of her goals, there are more on the horizon. She recently contributed to a regional history book for the Glen Ellyn Historical Society in Glen Ellyn, Illinois. She also wrote an article about John Stark in the Seven Years’ War, and she looks forward to publishing about her research interests of conscription and wartime drafts, resistance to conscription, and civil violence in the U.S. She has received a research grant through the State Historical Society of Iowa to fund her research. In Iowa, two provost marshals were killed while enforcing conscription during the first wartime draft during the American Civil War. With this grant, Stewart is preparing an article about this topic for publication in The Annals of Iowa, the state’s scholarly journal.

While seeing her own research through, Stewart continues making her own mark on history by impacting students every day in the classroom.

“I’m giving them a foundation to learn and recognize themes of the past to understand our modern world and current events,” she said. “I try to be firm but fair as an educator, maintaining an open dialogue and transparency with students. In addition to teaching the course content, I teach my students other life skills such as time management, critical thinking and writing.”