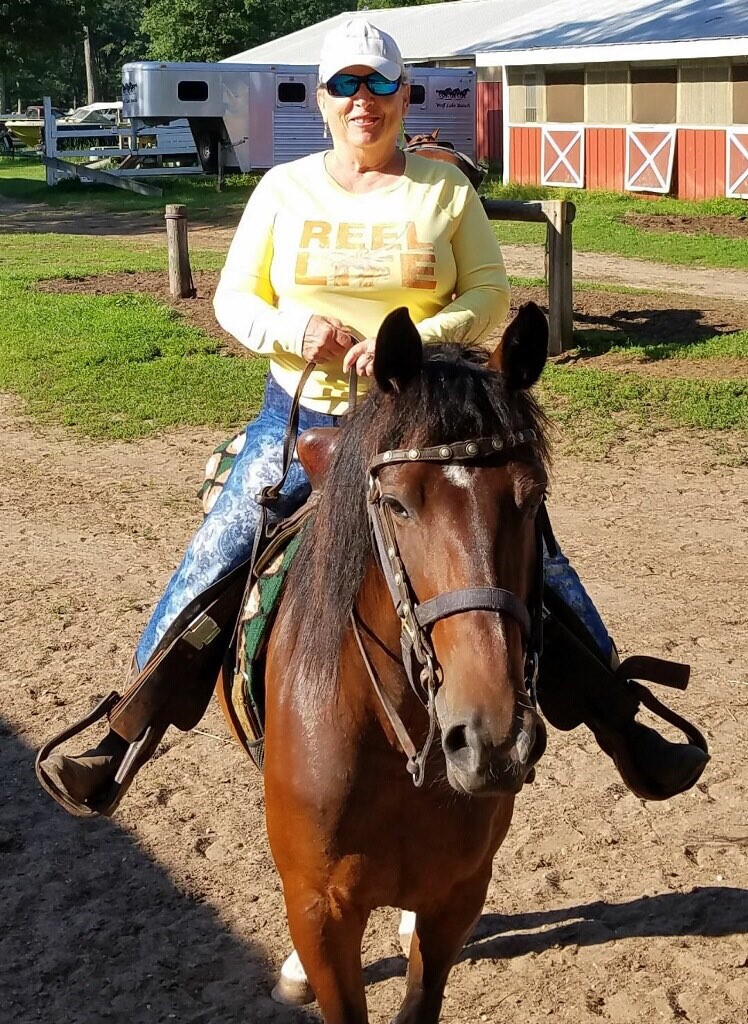 Christy Noll, '69, rides her horse at the Wolf Lake Ranch in Baldwin, Michigan, where she serves as its activities director each summer.

Growing up in Waukegan, Illinois, in the 1950s and 1960s, Christy Noll loved all things sports and “lived at the YMCA pool.”

“I was always interested in swimming, and coaches at the YMCA took me under their wing,” Noll said. “They told me I should become a PE teacher, and I believed them. At the ripe old age of 10, I knew what I wanted to do.”

At only five feet tall, Noll describes herself as a physical education “jack of all trades and a master of none.”  She was athletic, but she grew up in a time before most women enjoyed organized sports teams.

“All we could do was go out and play in mixed groups in the summers,” she remembered. “I played softball and volleyball, and I always stayed active.”

By the time she was in high school, Noll had made a name for herself with her athleticism, having experience in every sport that was taught in school. Her PE teachers recognized her talent and allowed her to be a leader in class.

“Waukegan High School was a big school; 4,000 students. Being a PE teacher was always in the back of my mind, and I began to have some influence with my PE teachers,” she said. “I remember, the day President Kennedy was killed, I was in the auditorium when we found out. We were supposed to have a PE test that day. Our teachers made us take it anyway, but I refused the test, because of what had happened. The next day, the teachers came in and said they were not using the tests since I wouldn’t take it. I really felt like I had the backing of the PE department. It was one of those things where you don’t realize the influence you have until that moment.”

Noll came from a family where college education was expected, so when high school neared its end, she began to focus on next steps.

“I can’t spell for crap,” she said with a laugh. “Math was my other strong point, but I knew I would go into physical education because I was good at working with people and helping people learn how to do things.”

She heard that Northern Illinois University had a reputable physical education department, so she applied and was accepted. It was the only school she applied to, and she became a Huskie in Fall 1965. She quickly became known for her work ethic and abilities, and her instructors allowed her to assist with teaching swimming and fencing while she was on campus. 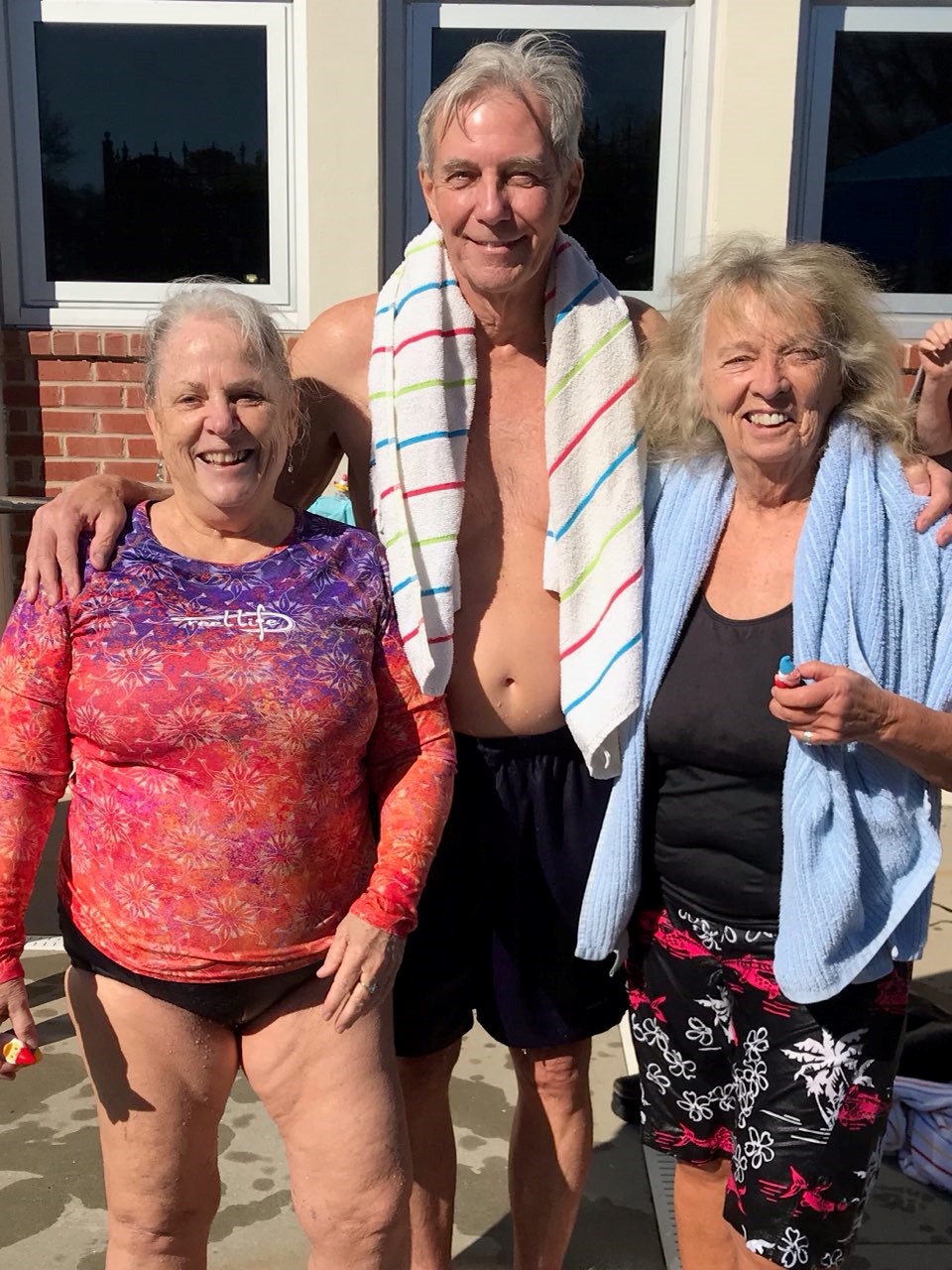 Noll (left) takes part in a "Polar Plunge" with her friends.

“My professors acknowledged that I could make a contribution,” she said, “and that gave me the confidence to continue doing what I was doing.”

In those days, females were told they did not have to compete with male students in athletics or in academics. They took courses and exercised in Anderson Hall, which was brand new at that time, and all courses were strictly female.

“The male students didn’t meet the women at all,” Noll said. “So when I went out into the world to student-teach, I was a little naïve. Everybody at NIU thought I would become a high school swim coach, but when I student taught and saw that all elementary school students were being taught by males, I decided that girls would really benefit from being taught by a female PE teacher. I had to be an elementary PE teacher. I knew these young kids could learn so much and would really benefit from being taught by both men and women in PE.”

Noll earned her B.S. in physical education in 1969 and landed a job at a school district in Wheeling, Illinois, during her last semester. She then moved on to teach elementary and junior high PE in Palatine, Illinois, where she remained for 32 years until her retirement from the district in 2002.

“I never married and because I never did, I never had the fulfillment of having children and all that stuff,” she said, “So teaching was my life.”

“I’m the kind of person who doesn’t sit still well,” she said. “I talk myself into helping out whenever possible.”

Since 1990, Noll has served as the convention assistant manager for the Illinois Association for Health, Physical Education, Recreation and Dance. Because of this role, she worked to get NIU more involved with the organization. In her last two years of teaching, Noll hosted student-teachers from NIU in her classroom. Each year, she also coordinates NIU education students to assist her in prepping for the conference.

“The students help me so much, and I am able to talk to students and help them get handle on their careers,” she said.

Now living in Athens, Georgia, Noll travels north for her summers. For the last 40 years, she has worked as the activities director for a dude ranch in Baldwin, Michigan, called Wolf Lake Ranch. Noll sets up activities and horseback riding for guests of all ages at the family-owned ranch.

And while Noll still has many adventures of her own, she makes time for NIU, giving back to the College of Education through donations, as well as volunteering.

“I am not the only NIU graduate in my family,” she said. “My brother went there, and he met his wife there. They sent two sons to NIU. Our family purchased a commemorative brick at NIU. I have just always been there, and I have always believed in supporting organizations that are teacher-affiliated.”

As for the career she chose many decades ago, when she was only a girl, Noll could not be happier with her decisions.

“Physical education and staying active did well for me,” she said with a smile. “It’s always been such a big part of who I am.”