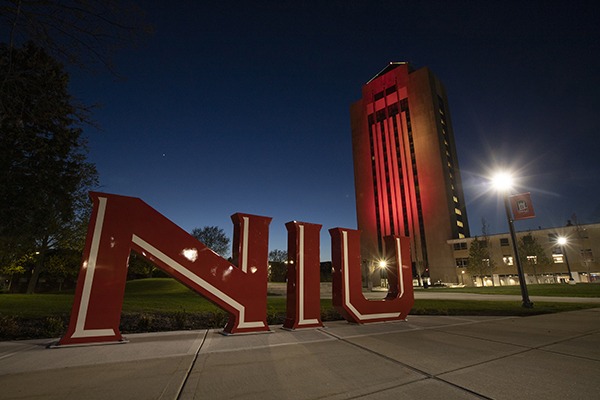 From miles around, passersby will see the outside of the Holmes Student Center tower lit with red lights on special days of commemoration or celebration.

Our alumni know that our traditions bind the NIU community. These shared experiences have shaped not only their years of college but have remained meaningful as they have forged their way into the world. One does not have to look far to see the mark of meaningful traditions on our campus and the Huskie Pack.

Each day at noon, the tower bells can be heard across campus, chiming NIU's beloved alma mater.

Football fans have responded “FIRST DOWN!” when the announcer cried, “And that’s good for another Huskie...”

Alumni bonded over the Huskie hand gesture and the Huskie Fight Song. More recently, with the construction of the Huskie Pride Sculpture in Martin Luther King, Jr., Commons, alumni and students have a popular place to gather, pose for photos and share their Huskie Pride on social media.

With the announcement of the University’s “Huskie Pride Lights Initiative,” the NIU community has one more way to share its pride in the institution’s great accomplishments and individual successes. From miles around, passersby will see the outside of the Holmes Student Center tower lit with red lights on special days of commemoration or celebration.

“We have so many great things to celebrate, whether it is recognizing our exceptional faculty and staff or being MAC Champions,” said Matt Streb, chief of staff to NIU President Lisa Freeman. “When people drive by and they see that the tower is red, they will say, ‘Wow, something cool must have happened at NIU today.’  They might not even know what it is yet, but they will know that something positive, something exciting happened at the University.”

This new custom was introduced in 2013 when the NIU football team went to the Orange Bowl, and the Holmes Student Center was lit orange as a tribute to the huge accomplishment. It helped garner excitement and pride in the upcoming game. 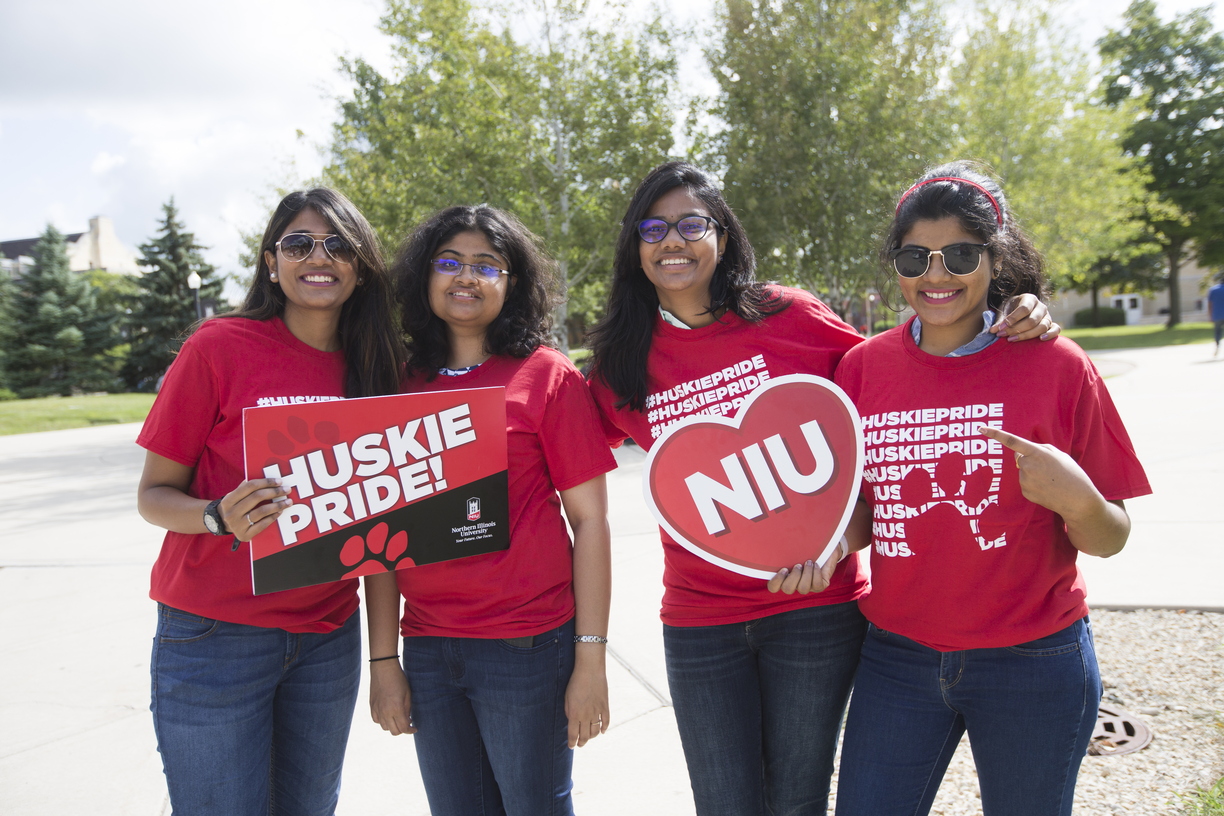 A shared Huskie Pride brings together students and alumni from all walks of life.

From there, Streb and other University leaders began to wonder how this kind of tradition might bolster the community on a regular basis. When the University’s 125th Anniversary planning was underway, the idea for lighting up the tower had real momentum, and a cross-campus committee was formed to discern exact criteria for lighting the building. Representatives from the student center, student affairs, faculty, student government, athletics, the president’s office, and University communications developed a policy to formalize what types of achievements and days will be celebrated and how to promote it. That proposed policy was reviewed by the policy library committee and approved by President Freeman on March 16.

“We submitted a policy that outlines the ways we will use this special tradition,” Streb said. “There has to be a balance between the types of things we celebrate. For instance, we will not be lighting it after every football win, but we will after a bowl win. We won’t light it after every basketball victory, but if we beat a ‘Power 5’ team, we’re going to light it.”

The tower was lit red for its inaugural celebration on March 20 in honor of 2021 Mid-American Conference Gymnastics Individual Champions Natalie Hamp and Tara Kofmehl, as well as for wrestler Brit Wilson, who received All-American honors and placed 6th place overall in the NCAA Wrestling Championships, and wrestler Mason Kauffman, who earned an “Elite 90 Award” for academics.

Other planned lightings will include commencement weekend, Homecoming weekend, NIU’s anniversary, and Welcome Days, among others.

Katy Jaekel, Ph.D., is an associate professor in the Department of Counseling and Higher Education, and she served on the Huskie Pride Lights committee.

“I think campus traditions help support a sense of belonging on our campus,” she said. “They bring us together and give us even more reasons to have Huskie Pride! We are such an amazing campus community, and it is so important that we remember to celebrate this.”

Debra Boughton, senior associate athletic director and chief of staff for Intercollegiate Athletics, was also a part of the committee.

“The visible pride is huge,” Boughton said. “When we are able to celebrate the accomplishments at NIU with our entire community it just means more. I am excited to light the Pride Lights for all the great things happening at NIU!”

While information about the Holmes Student Center lighting can be found at the initiative’s new website, plans are currently underway to develop a notification system for students, alumni, and friends of the University who would like to know when the tower will be lit.

Another very important aspect of this tradition will be the intentional darkening of the tower on Feb. 14 each year, in commemoration of the 2008 shooting on campus. 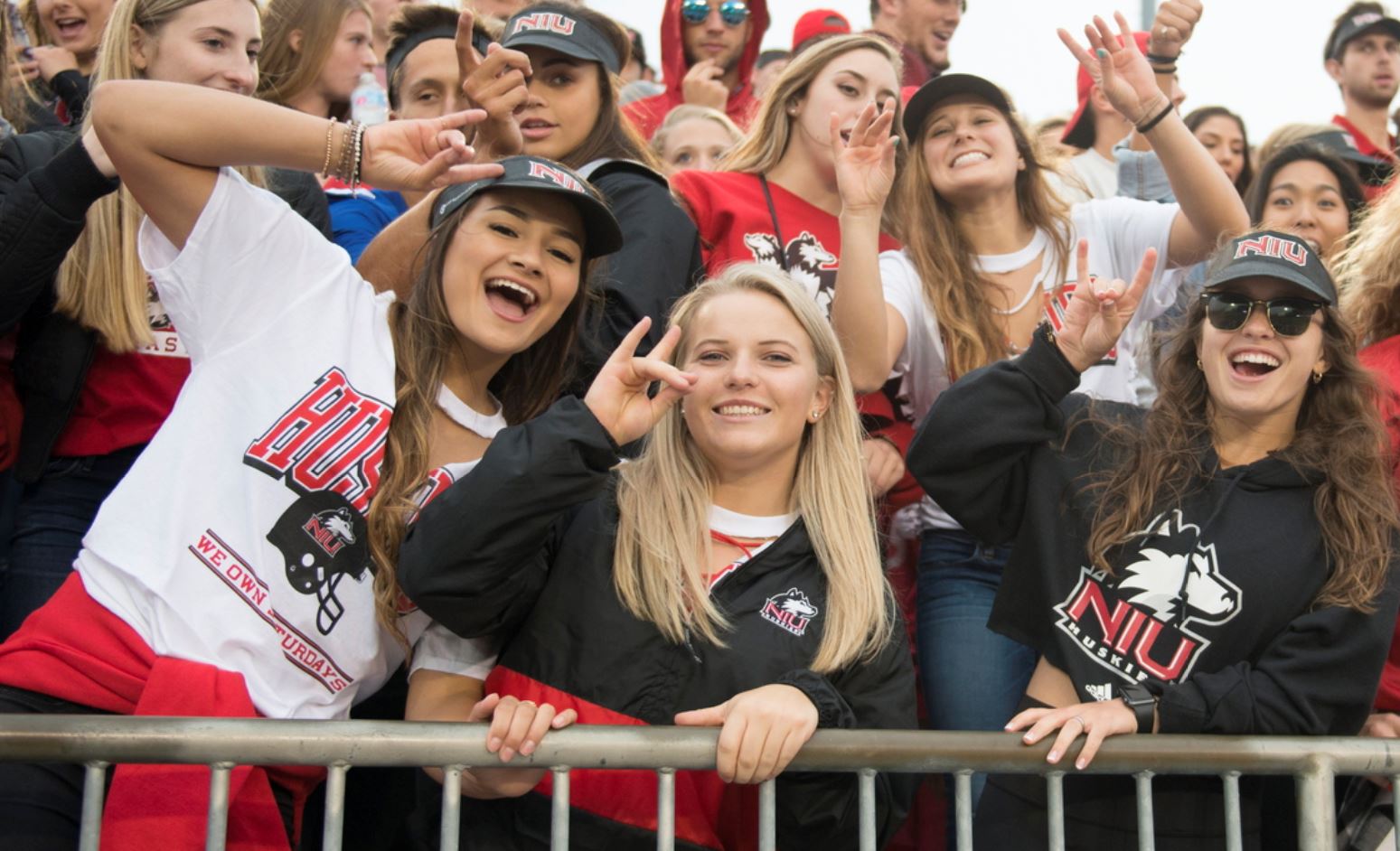 The Huskie hand gesture is just one way students, alumni and other fans show their pride.

“It’s really important to memorialize that day,” Streb said. “So, on Feb. 14, going forward, the tower will be dark. It has been more than a decade since that tragic event has happened, but we do not ever want to forget that it happened on campus. We think it will be powerful that the tower will be dark and quiet in memory of that horrible day.”

While the new tradition may cause questions at first, eventually, it will become part of the fabric of the Huskie community.

“Once we establish this as part of the culture, students and alumni will know it as a symbol of our pride,” Streb said. "The Huskie Pride Sculpture has become such a recognizable spot on campus.  We think it will be even more meaningful with the lighted tower in the background. Imagine if you were a student who accomplished something great, and you could go take a picture in front of the lights that were shining in honor of you!”

“These traditions serve as important markers of community, unity, and a shared meaning of campus for prospective students,” Jaekel said. “It communicates to them our values, our shared pride, and that we are a community.”

The Huskie Pack is thousands strong, from all walks of life, and hailing from places all around the world. Yet, all Huskies have one thing in common—enduring pride in what this University stands for and the many shared accomplishments its students, faculty and alumni collectively celebrate.