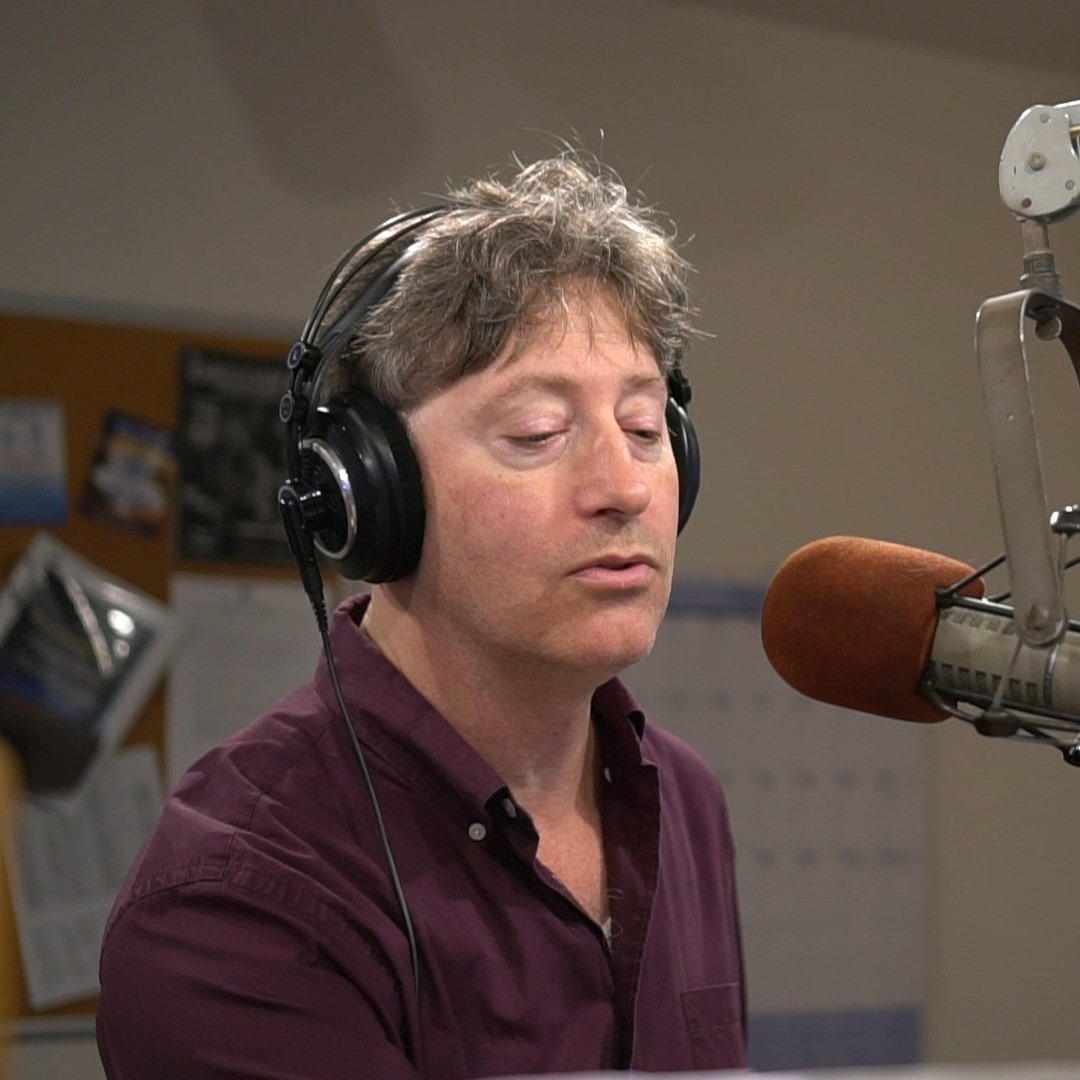 As the radio host and reporter of WNIJ's Morning Edition, Dan Klefstad, '89, M.A. '93, gets to do what he has always found most interesting—quality storytelling that connects people.

Radio and quality storytelling has been a part of Dan Klefstad’s life since the beginning.

In fact, six words describe the time and place of Dan Klefstad’s youth: “WMAQ is gonna make me rich!”

Klefstad, ’89, M.A. ’93, still remembers his dad answering every phone call with these words in 1975, as part of a country radio campaign throughout Chicagoland, although he never won any money.

Even as an elementary school student in Buffalo Grove, Illinois, during the ‘70s and ‘80s, Klefstad listened to a lot of radio, including WLS’s Larry Lujack, who quickly became his favorite host with his acclaimed “Animal Stories.”

“In 1979, I started listening to Steve Dahl and Garry Meier on WLUP. I loved everything about radio back then—the music, laughs, the whole ‘theatre of the mind’ experience,” Klefstad said.

In his teen years, Klefstad grew to enjoy writing fiction, but never seriously considered it for his future. He became obsessed with horror movies, and the CBS miniseries “Salem’s Lot” turned him on to vampire stories and gothic fiction.

“I was 16 when I wrote my first novel—a thriller loosely inspired by the TV series ‘Reilly: Ace of Spies,’ which was on public television in the 1980s,” he said. “My novel was terrible, but my mother encouraged me to keep trying.”

When he graduated from high school in 1985, Klefstad had no obvious career path, and he needed some time to find his passion.

“I was a drummer in a rock band, but life as a touring musician didn’t appeal to me,” he said. “I needed a couple of years, so I went to Harper College where I studied history and journalism. This is where I started focusing on the research and writing skills that now earn me a living.”

After earning his associate’s degree, Klefstad looked for a college that would accept third-year students near his family. NIU fit that bill.

While he was a journalism major, Klefstad says he also learned about great storytelling from his history courses.

“I liked NIU’s history faculty—especially Marvin Rosen, George and Elaine Spencer, and Stephen Kern,” he said. “Rosen was the most dynamic lecturer I’d seen, and I never missed one of his classes. He taught me the importance of story in history. From both Spencers, I learned the importance of objectivity and corroborating sources, and I quickly learned this fit in well with my journalism studies. From Kern, I learned how to spice up my writing with the goal of making it interesting to the reader. This was not a widely taught skill at that time, and it proved valuable for drafting radio copy and, later, fiction.”

While Klefstad stayed on campus, earning his M.A. in history, he worked as a music host at Northern Public Radio (NPR) station WNIJ. Soon after, he graduated and moved into the newsroom there, where he discovered his NIU education had prepared him well.

“History and journalism are the same, except, with the former, you’re presenting news that’s decades or centuries old,” he said. “The same principles of fairness, corroborating facts, and careful writing apply, and I continue to use these every day while hosting Morning Edition.”

Today, as the radio host and reporter of WNIJ's Morning Edition, Klefstad gets to do what he has always found most interesting—quality storytelling that connects people.

Klefstad believes strongly in NPR’s mission statement from five decades ago, to serve the individual, promote personal growth, regard the individual differences among men with respect and joy, celebrate the human experience as infinitely varied, and encourage a sense of active constructive participation.

“Being a part of that mission is powerful stuff,” Klefstad said. “Your personhood matters, and so does your participation in this ongoing experiment we call democracy. When I read the mission statement, it fills me with a sense of belonging—of a deep connection with my fellow humans—and I, as a public radio professional, have been given responsibility for maintaining that spirit of NPR storytelling. This is why I show up for work each day at 4 a.m.”

His mornings start with strong coffee, and once he has had a couple sips, he is ready to review the day’s stories with Morning Edition’s producer, Claire Buchanan.

“Basically, the two of us streamline copy so the sentences are easy to say in one breath, but, more importantly, so listeners can easily understand them. Subject-verb-object is the preferred order in radio copy,” Klefstad said. “We also double-check information for accuracy.”

Shortly before 5 a.m., he has all his newscasts ready, and Buchanan moves on to updating the show’s website and social media platforms as Klefstad prepares to go on air at 5 a.m.

“It’s easy to forget that ‘newscaster’ and ‘host’ are usually separate roles, requiring different skill sets. At WNIJ, however, I get to deliver the news—with all the seriousness that requires—while also finding moments to improvise, be fun and hopefully relate to listeners as they begin their day.”

This balance of credibility and companionship is a challenge to pull off, and some days will require a more buttoned-up approach. Other times, when the news isn’t so heavy, Klefstad can be more of an entertainer. He enjoys exercising both these muscles and tries to find the right measure for each when he arrives at work and writes the day’s news reports.

Nearly 30 years into his news reporting career, Klefstad has ventured back into his fiction writing. His latest novel, Fiona’s Guardians, goes back to his gothic roots, focusing on humans who work for a beautiful vampire.

“I have an active imagination, which isn’t always satisfied with the stories we normally cover on air—politics, health care, energy, the environment, social justice, arts and spirituality,” he said. “It’s helpful for me to create and explore made-up worlds where I have to adapt to undiscovered societies, even new laws of nature.”

Klefstad says NIU provided excellent faculty who taught him the skills he uses every day at WNIJ and as a writer of literature, and he views the University as a partner in his work.

“It’s important to note that NIU also owns the license for WNIJ. In this regard, the University’s commitment to NPR and public radio is as strong as my own, if not stronger,” he said.