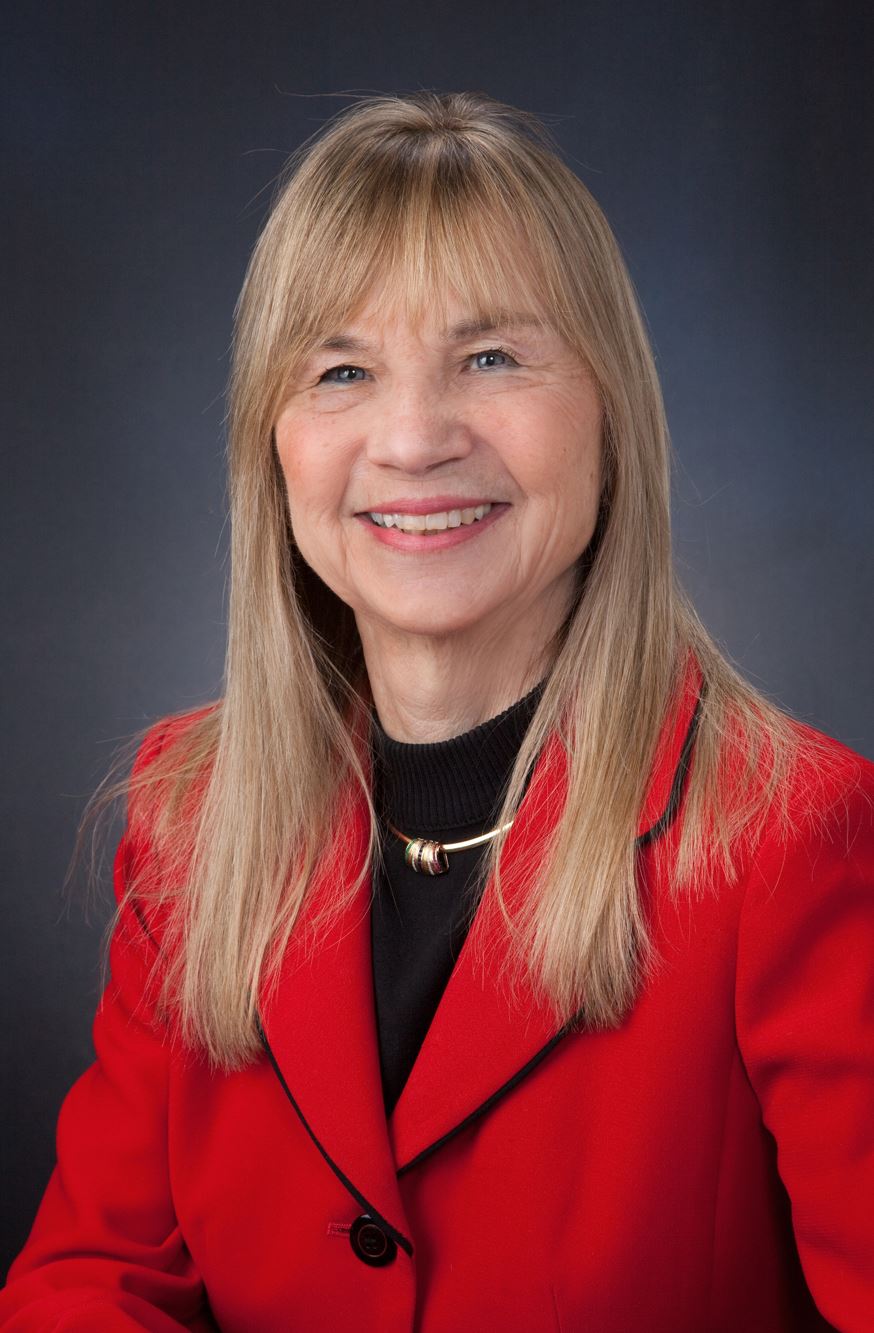 For her decades of incredible service to parents, students and communities—locally and internationally, through her work as an educator, Montessori advocate, and volunteer—Carolyn (Olson) Kambich, ’60, is being recognized with the NIU Alumni Association’s 2021 F.R. Geigle Service Award.

Growing up in rural Lake Bluff, Illinois, in the 1940s and 1950s, Kambich was a shy child who loved nature and animals.

“Next to our home at the end of the street, there were 30 acres of woods with a pond to explore," she said. "We loved being immersed in all of life! That was our playground.”

The daughter of Scandinavian immigrants, her parents, while not college graduates, fostered an appreciation for reading, music, art, nature and gardening.

“As a child, it felt like my parents were always educating themselves; they both loved reading," she said. "I remember my mother giving my sister and brother and I quizzes out of Reader’s Digest, to help us learn. My father’s National Geographic magazines inspired a sense of wonder in me. Both parents had a good ear for music, and we enjoyed singing at the piano."

Kambich noted that qualities of respect for all of life, excellence and perseverance were valued in their home while growing up.

"I remember my father’s old Swedish saying, which translated to ‘live and let live.' I enjoyed working with him in his big ‘Victory Garden’ with its border of bright pink petunias!  I felt richly blessed by my parents and their dedication to family.”

As a Lake Forest High School student, Kambich, while having completed all of the college prep classes, also enrolled in business classes—stenography, typing, and office machines, as she knew this would provide opportunity after graduation.

“Mr. Swan, my business teacher in high school, changed the course of my life when he asked me if I had thought about going to college because I had excellent grades," she said. "I replied that my parents couldn’t afford it. He explained that he had gone to the University of Illinois on a scholarship. I was unfamiliar with the concept of scholarships before that. When he asked me what I would want to do if I did go to college, I said that I would like to be a teacher. I think I got that from my mother.  She always loved learning and sharing.”

Kambich became involved with cheerleading and other extracurricular activities to enhance her college applications, as her teacher had advised. After choosing NIU for its excellent reputation as a teachers’ college and receiving a scholarship toward the cost of tuition, Kambich began her journey as an educator.  She worked as a waitress in the summers to pay for her $600 per year room and board fees.

While Kambich spent most of her time focused on studying, she did join a sorority and find some time for a social life.  A cheerleader, she met her now-husband Tony who was a physical education major and a Huskie football player, in her junior year.

The Kambiches married in l961 and continued teaching in public schools in Deerfield, Illinois. Carolyn who had three children in four years, stepped back from teaching to raise her own family. Still, she was very active with a local Preschool Mothers’ Club, and when a speaker from the Midwest Montessori Teacher Training Center came to talk with the group, Kambich’s life would never be the same.

Montessori is an individualized, child-centered method of education that is based on self-directed activity, hands-on learning and collaboration in a multi-age group setting. In Montessori classrooms, children make choices in their learning, while the classroom environment and the highly trained teacher offer age-appropriate lessons to guide the process. Children practice initiative, independence and interdependence daily.

To determine local interest in starting a Montessori school, she and her late friend Terry Fine put an ad in the local paper under “Miscellaneous for Sale." After receiving 200 phone calls, and doing some exploration with the Illinois Montessori Society, plans were made to begin the Deerfield Montessori School.  There was no elaborate business plan or investors—just a desire to follow four families' ideal for "education for peace" for their children with their personal labor.

Renting space from a local church and having Fine, a commerical designer, volunteer to make custom-sized furniture for the school, the Deerfield Montessori School was founded in 1966, with Carolyn Kambich as its registrar.  It enrolled 50 preschool children in the first year—25 children in the mixed-age morning class and 25 more in the afternoons.

“We continued growing from there," Kambich said. “Every decade we were creating new programs. In the 1970s, we started having parents ask if their children could come morning and afternoons and bring a sack lunch, so we decided to create a full-day Montessori program. Next, it was summer camp. Then it was programs for toddler/two year olds and infant full-day programs. In the 1990s, it was elementary Montessori school. We jokingly said, 'Our parents’ problems become our new programs.'"

Over the next three decades, Kambich helped establish five schools, now known as the North Shore Montessori Schools, and she currently sits on the Board of the Midwest Montessori Teacher Training Center.  Currently, the Kambiches' three children, Lisa, Tony Jr., and Doug, who were in the school’s beginning classes, are in charge of the daily operations of the schools and the Montessori teacher training center.

While building her businesses, Kambich also dedicated volunteer service to the Montessori Movement in the U.S. in various leadership roles at local, state and national levels, including the reorganization of the State Montessori society. Kambich has also kept busy serving in other ways over the years, as well.  In the 1980s, she was a board member of the Evanston/North Shore YWCA and a volunteer at their Shelter for Abused Women and Children. Using the Montessori principle of “prepared environment,” she and her colleagues from the Zonta Club, a women’s service organization, helped to uplift the residents by organizing and beautifying the children’s playroom, living room, kitchen, office, bedrooms and storage areas.

In the late 1990s, through her husband’s connection with the Winnetka Rotary Club’s International Microfinance Program for Women, the Kambiches traveled to Uganda, Africa. There, Carolyn began talking with mothers about what she did for a living. She found that parents were extremely interested in Montessori "education for peace," as Uganda was embroiled in civil unrest in Northern Uganda, with rebels abducting children and forcing them to become child soldiers.

Upon her return to the U.S., Kambich worked collaboratively with the American Montessori Society in New York and local Montessori organizations to bring four people from Uganda to the U.S. for Montessori teacher training and internship in her schools. Kambich coordinated a “shower” for one of these teachers-in-training, Christine Kijange, upon leaving, giving her materials that could help start a Montessori classroom. Her Victoria Montessori School opened in Entebbe, Uganda in 2001. However, in the years that followed, Kambich would help do small things that kept the school functioning at a higher level.  The school grew from 30 students to 500, with a five-building campus and a Montessori teacher training center. Christine’s brother, Lanam Kijange was also assisted in starting his Kampala Montessori School and his Olwal Montessori school in Northern Uganda.

"It has been a great pleasure to travel to Uganda 14 times and assist with teacher training, as well as many hands-on projects!" Kambich said. "Our biggest joy is to see the beaming faces of the children who are so eager to learn."

Currently, the Kambiches also continue to support post high school scholarships for Ugandan street children through Child Restoration Outreach Support Organization (CROSO).  She also she serves on the Peace and Social Justice Committee of the American Montessori Society on the national level.

In Kenya, the Kambiches helped the late Dr. Moses Mutuku of the NIU College of Education with his special education work and school development in Mwala, Kenya, and also connected him and NIU colleagues with the Victoria Montessori School and Teacher Training Center in Uganda.

Kambich also delivered lectures to parents and teachers in the newly developed Montessori school and Teacher Training Center in Slovenia, the homeland of Tony’s father.

Back in the U.S., Kambich, along with her husband had an opportunity to replace a private, diocesan grade school in Joliet, Illinois. St. Joseph’s School was set to close as were several others in low-income parts of Joliet. The Kambiches had long been supporters of St. Joseph’s and were instrumental in establishing a foundation to assist the original parish school. The new school, St. Joseph’s Academy, which they helped establish, blended traditional, Montessori and fine arts education serving children of all abilities from pre-K through 8th grade classes.

At NIU, the Kambiches have established an endowment fund, called "Education for Peace," in the College of Education.  Over the years, Carolyn and her daughter Lisa have provided workshops for NIU students and faculty members at their Montessori school sites as well at the NIU campus.  They have provided a set of Montessori didactic materials for NIU student use, as well as working with the Association of Illinois Montessori Schools to provide the NIU library with Montessori books and videos.

Serving on the NIU Foundation’s Red and Black Committee to raise funds for student scholarships was always a fun event.

Even with all the amazing service Kambich has provided over her lifetime, being honored with the F.R. Geigle Award comes as a surprise.

“I am honored and humbled. I don’t think of doing anything for the recognition," she said. "I’ve just gone about living my life, and I’ve been amazed when I look back to see where the 'yellow brick road' has taken me. When I was a child, I didn’t even imagine going to college. It didn’t occur to me that I would travel the world, visit six continents, and be able to help people in these ways. I am inspired to see the goodness in people. I am grateful for the support of family and friends. While our Montessori schools were to serve our children and the community, our four grandchildren have benefited from Montessori at the Elementary School level, as well, and graduated from college. Now, we will see what unique service they will bring to the world. It’s exciting and amazing how life unfolds while simply being present and living in the Spirit!”