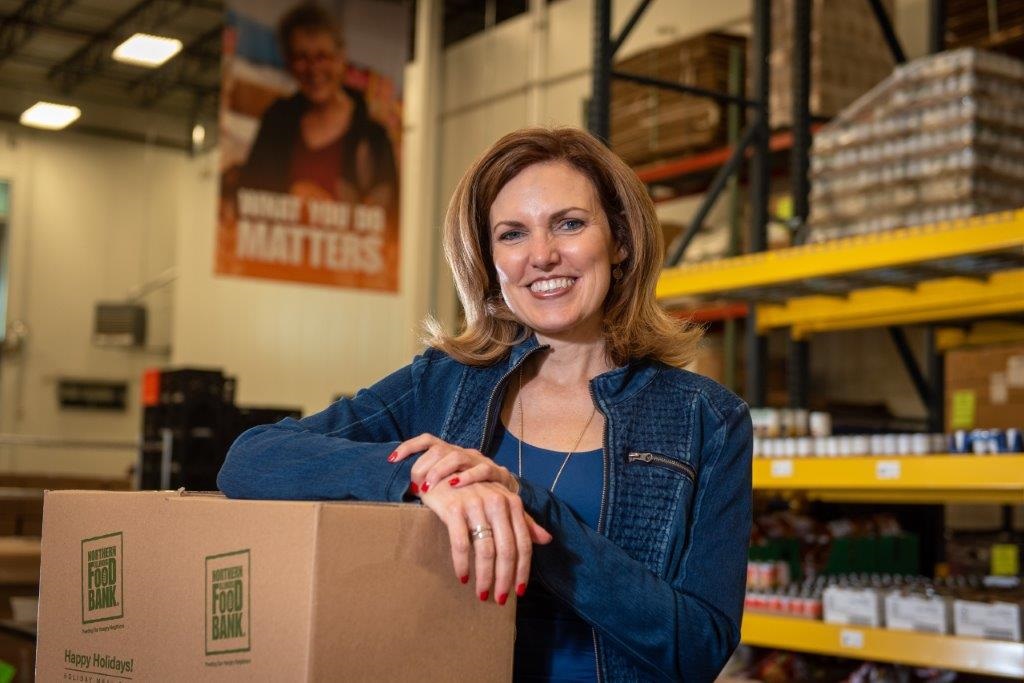 Julie Yurko, '90, went from cello performance to finding her passion for fundraising and service at NIU.

When things are difficult, Julie Yurko, ’90, remembers what a former co-worker at the Chicago Symphony Orchestra told her: “Even when things get tough here, when our day-to-day might be difficult, we always have the music.”

It is the sound of small talk between eager volunteers, the mobile food pantry backing into place to serve communities in need, and the “thank yous” received from grateful families who receive food.

“You go home, and you know that a child was fed today,” she said. “We have thousands of feeding sites, and people who are as deserving as anyone else—even if our culture tells them they aren’t—got fed today because of what we did. What a privilege it is to lead an organization like this and to be able to communicate the passion for our work and mission. It's about every person having the chance to be their best!”

Yurko is being honored with the NIUAA’s Alumni Achievement in Public Service award for her enthusiasm and unwavering commitment to feed those in need.

Over the past 18 months, Yurko and her team have had an up-close view of the hardships brought on by the COVID-19 pandemic. The food bank’s work has never been more important, with need growing exponentially in a matter of a few weeks in Spring 2020.

“I learned just how vulnerable families are during COVID,” Yurko said. “We would hold distribution events, and folks would be waiting a couple hours in line for food. You would see them sobbing. Crying. Young moms with babies in the backseat, older couples, people who look just like you and me. Our economy took a major hit, especially people who are working on the front lines of our communities.”

Yurko said the experience has impressed upon her, even more than ever, just how much we need to care for one another.

“I see neighbors helping neighbors all the time, caring for one another.” she said. “We also learned how quickly we can pivot at Northern Illinois Food Bank to make sure, no matter what, we are open, serving our neighbors, and smiling while we’re doing it.”

Last year, Yurko and her team were able to rise to the occasion, succeeding at something they never would have guessed was possible before the pandemic—delivering 100 million meals in Fiscal Year 2021. Prior to that, the most they had delivered in one year had been 70 million meals—30% less! The team ramped up their supply and volunteer power over a six-week period in March and April of 2020 and have sustained that increased level for a whole year.

“What excites me most is that we can change the charitable food system for the better,” said Yurko, who has served in her role for the last seven years and worked for the food bank for 12 years. “I am so excited when we can bring in an outside partner who wants to be a part of what we are doing. We have that kind of relationship with Door Dash and Walmart, for example. When they are excited about our programs, I know we’re on to something!”

These achievements do not come by accident. Yurko’s years in the nonprofit sector have given her the skills and management expertise to lead by example and truly invest in the people she serves.

Growing up in the Chicago suburbs in the 1970s, Yurko was raised by a teacher and aspired to be a teacher, too, until she began playing cello in the elementary orchestra. Picking up piano, too, it was clear she was musically talented. When her father was transferred to a job in Washington, D.C., during high school, Yurko used college as the excuse to go back “home” to the Midwest to study cello performance. 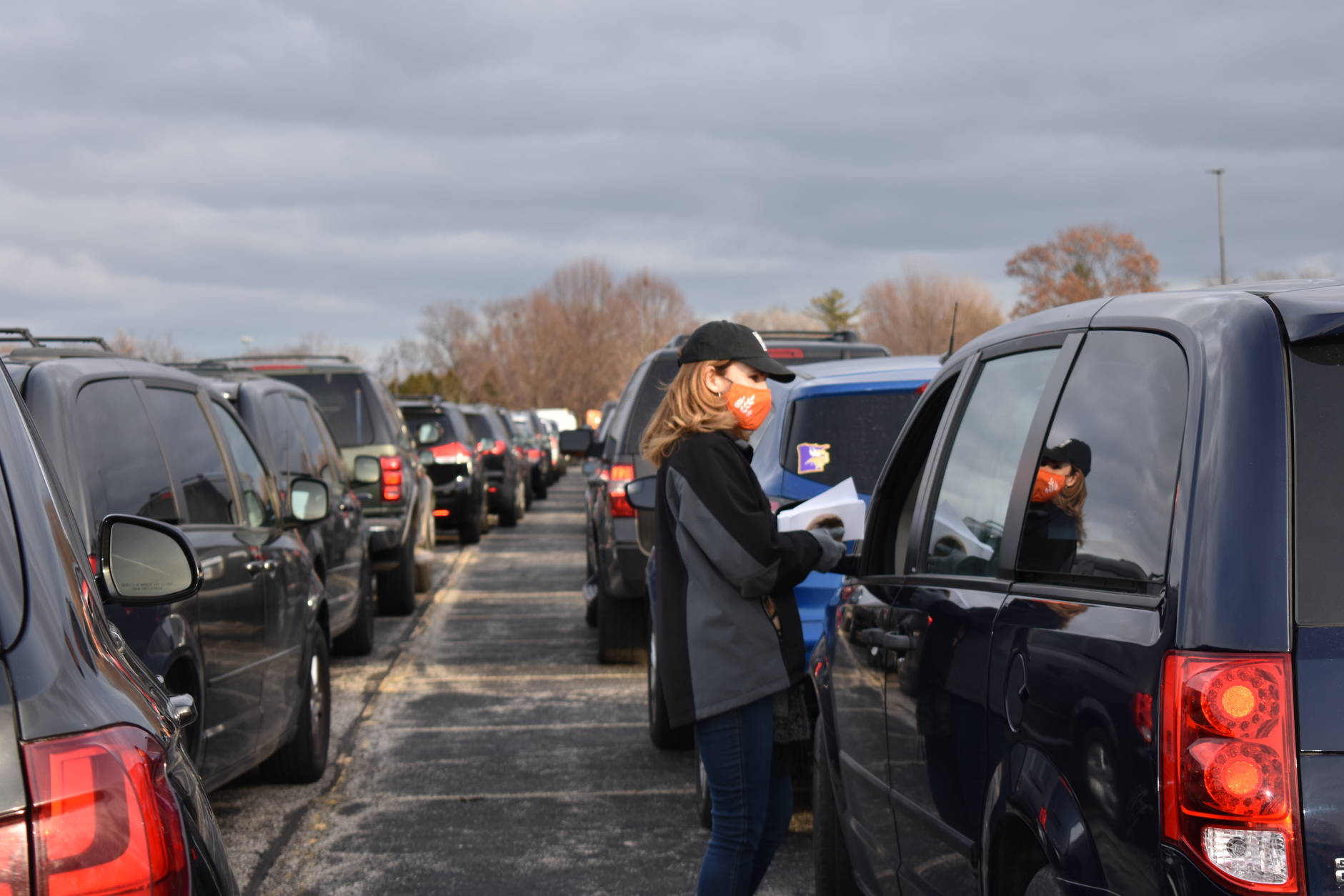 Yurko welcomes neighbors in need during the Pop-Up Market at College of Lake County.

“When I visited NIU, everyone was so friendly. The buildings were bright and beautiful, and it just felt 'right.' I knew the classes were taught by highly accomplished musicians. There was no competition. I was going to go to Northern.”

Once on campus, Yurko quickly realized two things—to be a performer, one must be extremely talented and willing to dedicate one’s life to the music. This often included an uncertain future.

“It was frightening to me,” she said. “I need more structure than that.”

Luckily, when she worked on her Honors Capstone Project, Yurko researched the business side of the music industry and realized it was something she could see herself doing as a career.

“I thought, 'Oh, this is what I love!  I’m in the community that I love and understand, and I don’t have to be a performer,'” she said.

Relieved at the prospect, Yurko took an internship with the Chicago Youth Symphony Orchestra, where she worked on fundraising for the first time.

“I saw so much beauty in building relationships, and I learned that I could encourage others to invest in music," she said.

“At the food bank, my job is mostly talking to people—our team, donors and volunteers,” she said. “But for me, it’s about the person who is struggling. They may feel in some way that they are not worthy and not good enough, and I want them to walk away and to say, ‘People care about me. I’m valued and important.’”

Even though her career path has veered a bit from her original bachelor’s in cello performance, a career in service is music to her ears. She credits NIU with giving her the skills and leadership ability to succeed.

“When I went to NIU, there were a whole lot of friendly, talented, very engaging people there,” she said. “None of us were pampered. We gave it our all. We did it ‘the hard way.’ While Northern may not be seen as prestigious as some other universities, it should be.  To me, NIU is top-notch..”

“NIU helped create a leader in me. They were preparing me, and I didn’t even know it. They say you want to be a big fish in a smaller pond to learn to be a good leader. NIU was the perfect pond for me.”