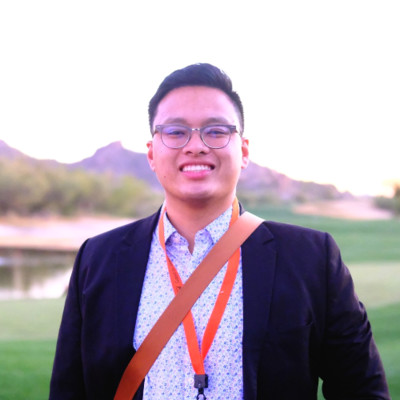 When Jonathan Abejuela, ’11, M.B.A. ’17, reflects on his time as an undergraduate student at NIU, he sees a young man who was “making mistakes and getting better as a person.”

He had to see what not to do in order to learn a different way.

Growing up on the island of Oahu, Hawaii, Abejuela was originally interested in becoming a pilot, but his dreams were dashed when a military recruiter looked at his glasses and explained he had “no chance.”

“I spent many years wondering what my next steps would be until I eventually moved to Gurnee, Illinois, to live with my dad and think about college. I didn't know what my future should be, but I knew that I needed to make a change. I was inspired by my parents who immigrated here from the Philippines to change my stars, looking at their experiences, and I saw my shot was quickly coming.”

Abejuela decided on NIU for college, rooming with his best friend and high school football teammate.

“I believed we were on the same track. However, I learned quickly that these things do not always work out for the best. I was on academic probation my freshman year, with my college career looking like it would quickly come to an end,” he said. “However, I made a big change and pushed myself outside of a comfort bubble of friends I knew, moved to another dorm and expanded my horizons. I was able to get back on track and focus on school.”

While Abejuela still keeps in contact with his high school friend group, he was able to make new friends and create new experiences through branching out and doing what was best for his education. From here, he pushed to find out that college was “more than just partying.”

“I joined every student association and club that I could find—from a tackle football club, the Business Administration Student Association, the Society for the Advancement of Management, and Campus Ministry at the Newman Center. I made great friends in each and learned more and more as I constantly tried to find myself.”

After earning his B.S. in business administration, Abejuela went on to work at PPI Beauty and Nestlé, forging his dreams in the retail industry.

“My graduate career was interesting, because I had spent many years away from the NIU community in the process. I regularly attended football games and tailgating events, even attending the Orange Bowl in 2013, but I was not a part of the NIU academic or development community,” he said. “When I went back for graduate school in 2016, I was on a path in my career where I felt that I was getting stagnant. I was in a good job, but felt I was not where I wanted to be in my career.”

With support from mentors at Nestlé, Abejuela was able to pursue an M.B.A. at NIU.

“I quickly jumped at the opportunity, as I felt NIU had given me so much to help me become who I am,” he said. “The experience was very much a continuation of the meaningful experiences I received during my undergrad. We had terrific professors who constantly challenged us to be better businesspeople as well as better people, no matter the levels of success we achieved.”

Abejuela notes that the NIU community is very much like he was when he was a student—students who were most often the first in their families to receive a college experience and were looking to change their stars or elevation in life. Still, they go on to prove they are gifted and can do great things.

“The degree is just paper, but attitude is everything,” he said. “You have to show you will outwork those who will feel they are above the work at hand. I’ve taken this attitude to everything I do and, as a result, have seen some success in it. I constantly find myself working with people who come from a higher pedigree than myself, but I remain undaunted by what I can contribute.”

After earning his M.B.A., Abejuela went on to work as associate insights manager for at Topco Associates. Currently, he serves as a category development manager for Wells Enterprises, which is the largest family-owned privately held ice cream processor in the United States, producing more than 900 ice cream and frozen novelties treats, including Blue Bunny® ice cream and desserts, along with the iconic Bomb Pop® brand.

Through his experiences, Abejuela feels he has wisdom to share with students and alumni. Recently, he spoke to CHANCE University 101 students about starting steps to the college experience. He also regularly speaks to prospective M.B.A. students on behalf of the College of Business, pushing them to take that next step in their collegiate careers. In November, he hosted a football watch party and served as a judge for the College of Business’ Ethics Bowl competition.

Whenever he gets a chance to speak to the students, Abejuela takes it, because there is always someone who needs help.

“I was once in the seat of the people I am trying to help. Now is my chance to be a leader and help people find a level of success at or greater than the level I have achieved. I am always so happy to see the next generation of NIU achieve new levels of success,” he said. “These kids have big dreams, but they might feel like the underdog. It helps to hear a story of someone who felt like college was an impossible goal but found a way to achieve it. I help them see that just because it hasn’t been perfect so far, doesn’t mean they can’t change their stars. My background was very similar to theirs, because I was far from the perfect student, but I too wanted to make a change.”

Abejuela is eager to give back at his alma mater because he believes in the University and its core values.

“NIU gave me everything I needed to succeed,” he said. “No matter who we go up against, we put our best foot forward and surprise many. Personally, I feel NIU gave me the foundation I needed to be successful in anything I chose to do in life.”