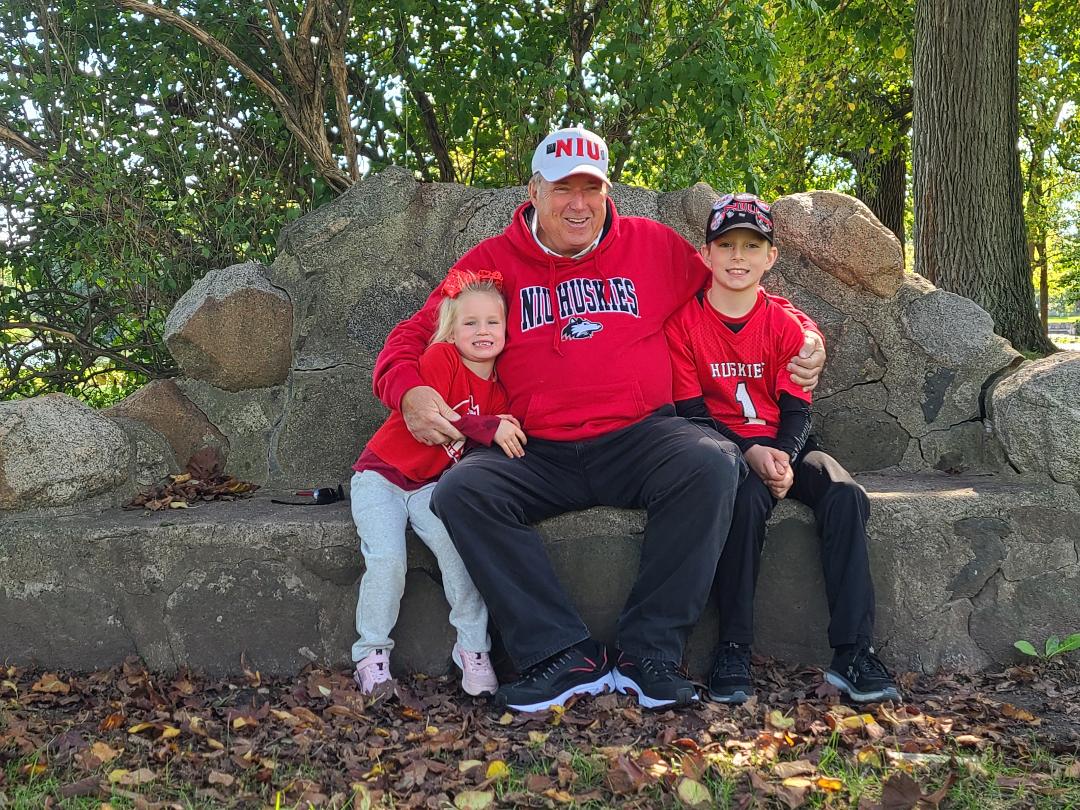 Tom Libert , '74, encourages alumni to say "thank you" through volunteering at NIU. Here, he is pictured with his grandchildren on campus, Kaylee and George Mooney.

While Tom Libert’s management degree was an asset in his career, he did not follow a traditional path in the business world.

“After graduating in 1974, I became a member of the Chicago Police Department (CPD) and served for over 30 years. I worked in various areas of the city and in many capacities,” he said.

Libert’s duties and ranks included police officer, tactical officer, field training officer, sergeant, lieutenant, and captain. He worked in district patrol, traffic unit and at the police academy. From being a field training officer and on up, he relied on his management degree to provide good mentoring and leadership to others.

While Libert had many great experiences with the CPD, one of the best was being assigned to the Education and Training Division--which is better known as the police academy. He served there as the commanding officer of the Instructional Design and Quality Control Unit.

“It was my responsibility to ensure that the police recruits and in-service officers were receiving the correct training,” he said. “One of the accomplishments that I am most proud of is being part of the group that designed the CPD’s School Violence Incident Plan. I also designed, planned and coordinated city-wide training exercises in the use of that plan to respond to an active shooter.”

Before retirement, Libert had begun teaching college courses part-time.  After retiring from the force, he brought his passion for training others to Purdue University Global where he has worked as an adjunct professor, teaching various criminal justice courses in the College of Behavioral and Social Sciences for the past 17 years.

“This is an online format university. Many of my students are non-traditional, and they tend to be older than the students at NIU. They have families, they have jobs, and they are striving to get an education that will benefit them in their present career or to start a new career,” he said.

Libert gains fulfillment by helping highly motivated students who are striving to better themselves.

“Despite being an online university, there are many students who you do make a connection with. It is gratifying to see them progress,” he said. “The professors and instructors at NIU and so many other universities had to learn how to teach virtually during the pandemic, while I had been doing just that for years.”

Libert was born and raised on the northwest side of Chicago, attending St. Francis Borgia Elementary School and Holy Cross High School in the city before enrolling at NIU.

“NIU had more than 20,000 students at the time I went there,” Libert said. “I felt like a drop of water in the ocean, but it was exciting to be part of something so big. Through dorm life and classes, friends were made, and I keep in touch with some of them, after all of these years.”

He attended football and basketball games, as well as concerts on campus. He participated in intramural sports, while focusing on his studies.

Some learning came from exposure to differing viewpoints and experiences. Libert attended NIU during a time when the campus was mired in political and social tensions regarding issues like the Vietnam War and the killings at Kent State University. Libert’s future career in law enforcement was influenced by these eye-opening experiences.

Despite the unrest of these times, he worked hard to focus on his academic goals and complete his degree.

“Academically, math was my strong suit, and my ambition was to attend NIU and earn a degree in mathematics and subsequently teach high school math,” Libert recalled. “After three courses in calculus left my head spinning, I went through a few majors until I landed in the College of Business and earned a degree in management. Learning the skills and concepts that a good manager and leader should possess provided the tools and insights to further my career in multiple leadership positions. My education also provided a framework of good study habits and test-taking skills that I utilized during my career. Several of my promotions were partially based on examinations.”

Libert notes that NIU’s education also provided a good foundation for him when he earned a Master of Public Administration degree from the Illinois Institute of Technology.

“I was the first person in my family to attend NIU, and it was an adventure that was just mine,” he said. “NIU became part of me. It was not just a place to receive an education. NIU is where I moved away from my parents, grew up, matured, learned and experienced new things. NIU is where I met my wife of 44 years. NIU is where I brought my children to football games, watch homecoming parades, and to feed the ducks at the lagoon.”

Because of the deep connection to his alma mater, Libert has remained active at the University, volunteering in many ways over the decades. He has helped Huskies by being a greeter at the graduation cap-and-gown pickup, as well as acting as a judge and moderator for several College of Business ethics competitions.

“I have given presentations to classes, including an introductory criminal justice course and applied ethics presentations during BELIEF Week in the College of Business,” he said. “In advocating for NIU, I have participated in several virtual meetings with Illinois legislators. These were conducted to share our experiences at NIU, and how strongly we support NIU, so that the legislators will keep in mind the importance of NIU in carrying out their legislative duties.”

Libert says his most important volunteer role has been being a member of the NIUAA Board of Directors.

“I have been a board member for several years now, and I love every minute of it,” he said.

Libert works as a member of the board’s Awards Committee, reviewing and helping to decide who will be recognized with alumni awards each year. He is also a member of the Volunteer Engagement Committee and is also the advocacy liaison for the Advocacy subcommittee.

“Volunteering has kept me close to NIU,” Libert said. “Now, that I am semi-retired I have the time to feel part of something that is worthwhile. It allows me to be informed of what NIU is all about today and how it has grown in its missions and goals.

“Being involved with NIU in any capacity is a way to say “thank you” to NIU. I encourage alumni to come back to campus. See what is new, see what has changed, and have some of those old feelings and emotions rise up again within themselves.”