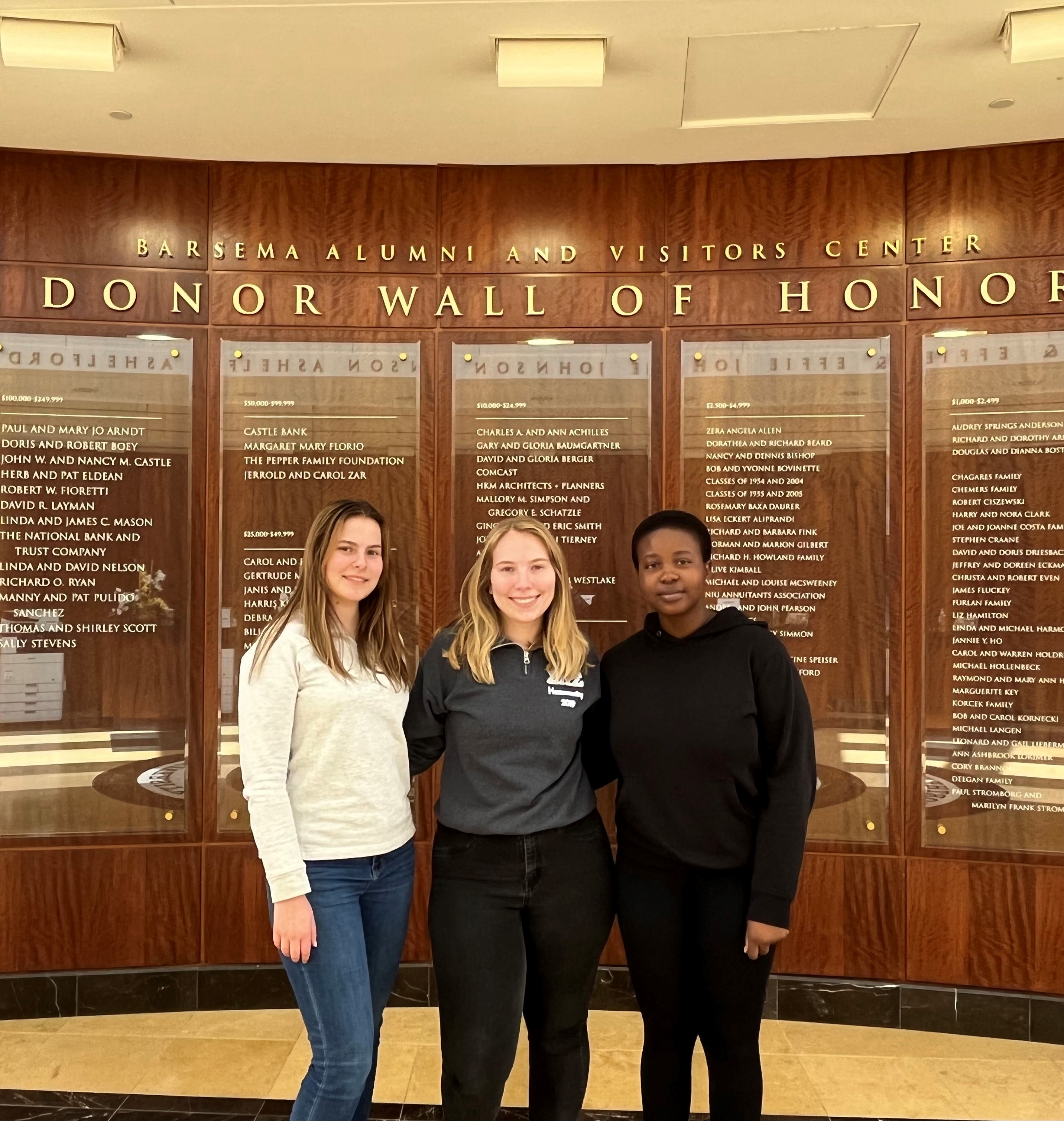 “I learned a long time ago the wisest thing I can do is be on my own side, be an advocate for myself and others like me.”

Maya Angelou was credited with this bit of wisdom, but here at NIU, it plays out on campus and around the world every day—and never more than during the first week of March, when 21 volunteers and friends of the University brought students’ interests and concerns to Illinois’ State Capitol, during the NIU Alumni Association’s Advocacy Week in early March.

A third-year student, Adebayo, who was born and raised in Nigeria and is studying chemistry as part of the pre-med program, felt strongly that she should do her part to support advocacy efforts.

“I made legislator sheets for about 35 legislators,” she said. “I also placed phone calls to legislators’ offices to see if they were interested in meeting with alumni from NIU to hear about the University’s legislative priorities, and I helped schedule appointments."

By being involved in this way, Adebayo learned that advocacy is about giving voice to the University’s priorities and areas of interest to the Illinois State government.

Growing up in Urbana, Illinois, junior Emma Hazen loved working with animals and came to NIU as an environmental studies major. Today, as a political science and nonprofit & NGO major, minoring in women & gender studies and sociology, she hopes to eventually work with animal rights organizations. Working as NIU Foundation Fellows, she and Casner have been able to gain valuable job experience with foundation staff as they prepare for careers in the nonprofit sector.

“I supported the NIU Foundation’s advocacy efforts by contacting legislators to participate in our Advocacy Week,” Hazen said. “I learned a lot about the long process of advocacy work, and how much preparation goes behind it. It was enlightening to see how a university creates relationships with legislators.”

"The thing I like most about my work is the variety of work that I do," she said. "I know that I have been able to learn a lot of skills that are useful for my future careers. For instance, I specifically support advocacy efforts by working to schedule and call senators and legislators for appointments during the week of advocacy week. I also worked on trying to get students to attend these events. I would say something I learned about myself through this project is that I am able to adjust to a fast-paced environment for events.”

It is especially inspiring when these advocacy efforts yield an overwhelmingly positive result, as they did last month, with virtual and in-person advocacy efforts. In part, because of the work of volunteers and the leadership of our student workers, there is much to celebrate!

Governor J.B. Pritzker signed the FY22 supplemental budget and the FY23 budget for the University into law. In addition, $122 million was added for the Monetary Award Program (MAP grants), with an increase in the maximum award to $8,508 per recipient. A level funding increase of $35 million was designated for AIM High, a scholarship program that provides merit-based awards to undergraduate students. Lastly, a 5% increase in funding was designated for public higher education for the fiscal year 2023, and an additional 5% supplemental increase was made for public higher education for the fiscal year 2022.

Hazen noted that it is motivating to see, first-hand, how her work impacts her peers and her university.

“I enjoyed working to support our alumni because they show so much appreciation for the work we do as interns and volunteers,” she said. “Of course, it’s an extra benefit that the work we do goes back to our campus community.”

Adebayo credits her work at the alumni association for helping her build a network that will continue to grow, even after she earns her degree.

“I have enjoyed working to support our alumni. Being able to do this allows me to connect with alumni from around the world, and this puts me in a position where I can see myself as a future NIU alumna who is willing and ready to give back to the University,” she said.

For Hazen, advocacy projects are just the beginning of her work in the nonprofit world.

“The best part of working with the NIU Foundation is the people we get to work with. I have made great connections with faculty and coworkers and learned experiences that I couldn’t have gotten from a textbook. I feel completely prepared for a career after NIU, thanks to the foundation.”