For Betty Trummel, M.S.Ed. '91, the Outdoors Has Always Been Her Classroom
By Tony Scott 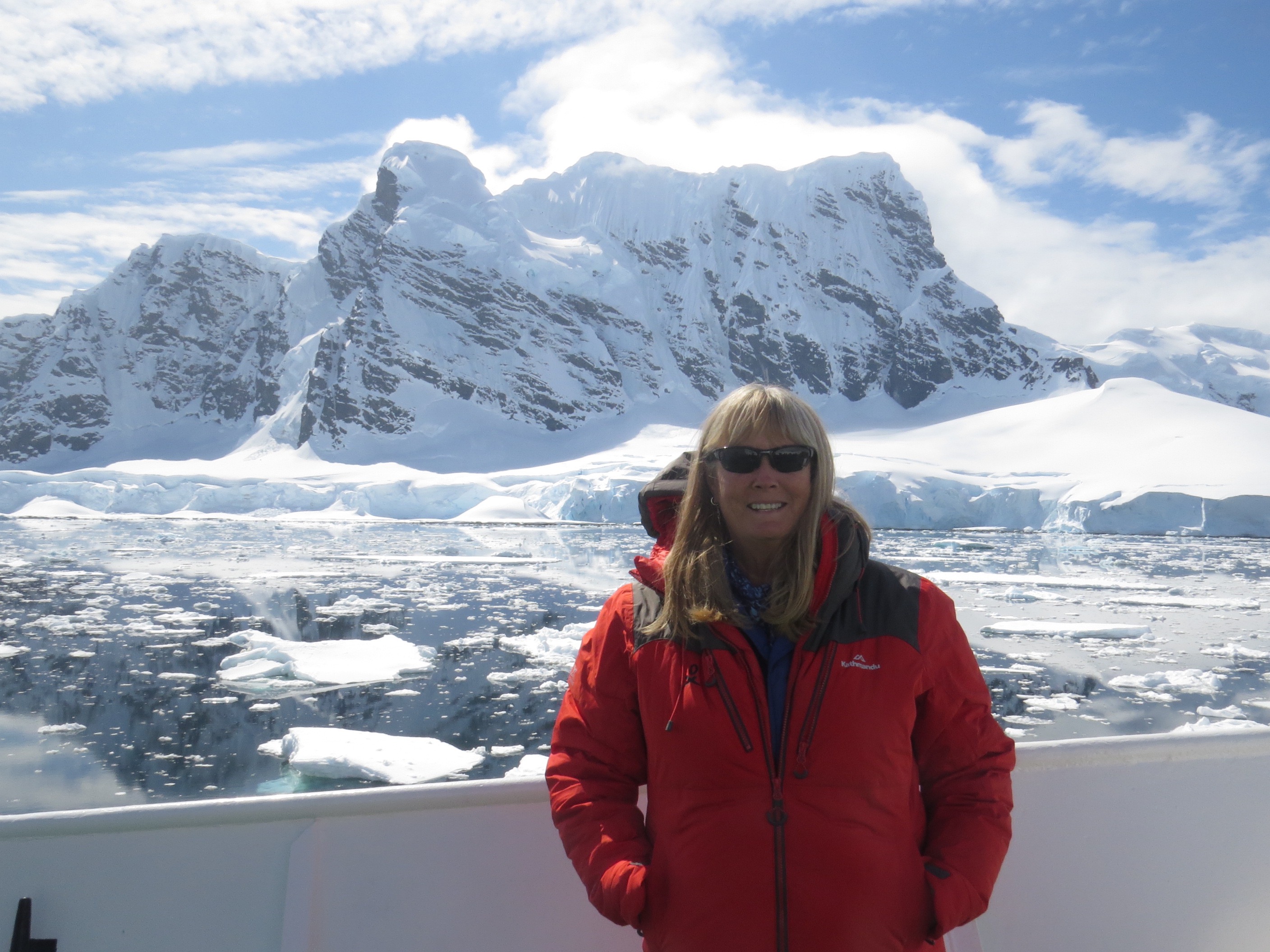 Betty Trummel, M.S.Ed. '91, during her Homeward Bound trip to the Antarctic Peninsula in 2016.

Educator Betty Trummel, M.S.Ed. ’91, has traveled around the globe learning about and teaching environmental science, even into retirement, including several research trips to Antarctica.

Trummel, who taught elementary school for more than 30 years before her retirement in 2015, and also taught education classes at NIU as an adjunct professor, continues to educate people on the science of the outdoors.

Trummel’s love for the outdoors began early, in her childhood, but her passion for science, and science education, took some time to build.

“I never had a good science teacher in high school,” she said. “This happens a lot, where I wasn’t inspired by anybody in science, I didn’t feel like I was that qualified to teach elementary school science. In a college prep course of education, you take a couple classes for teaching science and that’s it.”

Trummel grew up on a farm in rural New Jersey, where she found her love for the outdoors.

“My life was our pond, frogs, my treehouse, being outside,” she said.

After receiving a bachelor’s degree from the University of Illinois in 1978, Trummel began her teaching career in tiny Tampico, Illinois. She taught there for a few years before moving to Massachusetts, and then returned to Illinois in the late 1980s.

Early on in her teaching career, Trummel saw an ad in Ranger Rick magazine, published by the National Wildlife Federation, that promoted a conservation summit in Colorado.

“So, I saved my money and went to Colorado to the YMCA of the Rockies where it was being held, in 1983,” she said. “I said, wow, this is what it’s like to be with people that love the outdoors and want to bring it into classrooms. It really ignited this flame that had always been there.”

The experience inspired her to include lessons about environmental education in her elementary school classes. She built a kelp forest in her classroom, she ran an energy fair at her school for many years, and did other activities to keep her students interested in science.

“My classroom became completely focused on environmental education and science,” she said. “Even though I taught every subject, everything had a connection to the outdoors.”

Her classrooms featured physical items from the outdoors that students could feel and learn from, including beehives and deer and elk antlers.

“I still use that stuff to teach, because nothing compares to the real thing,” she said.

It was after returning to Illinois in 1988 from Massachusetts that she decided to go back to school and get her master’s degree at NIU, while teaching full-time, living in Crystal Lake, and raising her son as a single mother.

Trummel praises the outdoor education faculty at the time, including Clifford Knapp, Sonia and Robert Vogl, and director Robert Helmkamp, for running such an impactful program.

“Northern was the closest school that offered outdoor education,” she said. “Hardly any schools did at the time, and it was a wonderful program. I can’t say enough about the program.” 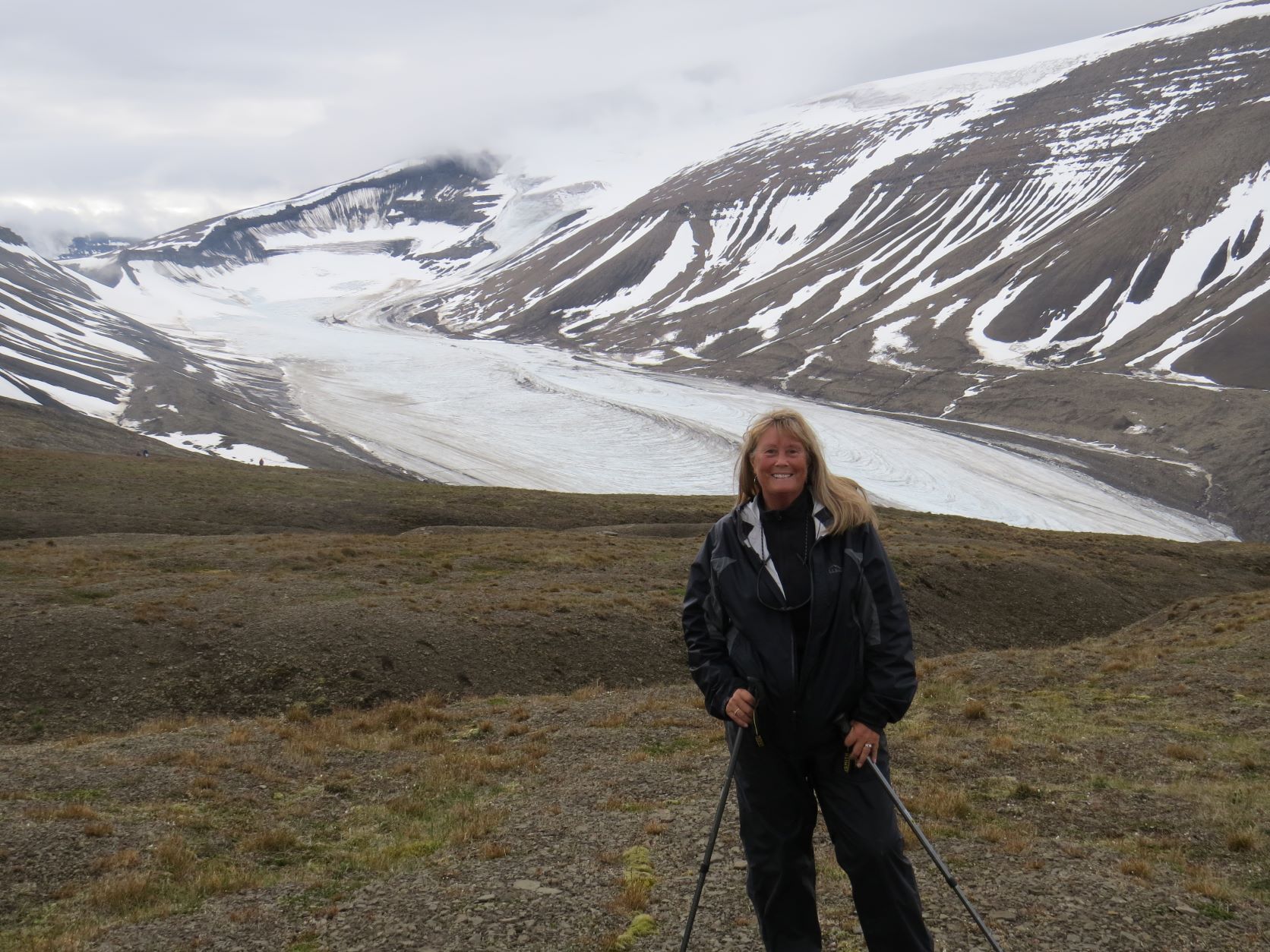 Betty Trummel, M.S.Ed. '91, during a trip to Svalbard with a teaching colleague from Italy.

In 1996, Trummel won a Presidential Award for Excellence in Mathematics and Science Teaching and traveled to Washington, D.C., for the awards ceremony. She sat next to a representative from the National Science Foundation who told her about a program where teachers go to Antarctica.

After being encouraged by the representative, Trummel applied and was accepted. The experience of traveling to Antarctica had a major impact on Trummel.

“That changed my life,” she said. “That program changed the trajectory of my teaching for the rest of my career. I met amazing scientists, I was immersed in the science. I spent seven weeks in Antarctica the first time.”

Trummel went back to Antarctica in 2006 as part of the Antarctic Drilling Project, or ANDRILL, and its affiliated Research Immersion for Science Educators (ARISE) Program, where she worked alongside NIU professors Ross Powell and Reed Scherer. Trummel was also part of the Whillans Ice Stream Subglacial Access Research Drilling (WISSARD) Project, which also involved Powell and Scherer.

In 2016, she was part of another Antarctica expedition called Homeward Bound, an initiative teamed with a science education program involving 78 women from around the world. That same year, she participated in an expedition to Svalbard, a Norwegian archipelago between mainland Norway and the North Pole, with a fellow educator from Italy and his high school students.

Shortly before retiring, she launched her own business, the Science Roadshow, where she created outdoor education programs for all ages to increase knowledge of science and technology. While her activities slowed during COVID, she still gives presentations on science to eager students all over the world.

In addition to her work in the Antarctic, Trummel also teamed up with Gunnar Jonsson, a professor at Lulea University in Sweden, to establish a teachers exchange program, where she would take teachers from the U.S. and bring them to northern Sweden to see what education was like there. Teachers from northern Sweden would spend time in Illinois schools, she said.

“Our whole focus was environmental education and sustainable development,” she said.

Trummel said she was fascinated by the differences between the U.S. and Sweden and how their cultures approach outdoor education.

“Sweden is amazing in how they incorporate outdoor experiences for their students,” she said. “They don’t stay inside when it’s 30 below. They get their butts outside in the right gear, and they play in the snow.”

Outside of her environmental science work, Trummel has also traveled several times to Zambia as part of a literacy advocacy program, A to Z Literacy Movement, working with students and teachers in rural schools there.

When asked about what advice she would give to teachers who are just starting out their careers, Trummel suggested they look for opportunities outside of their comfort zone.

As an example, she said she recently applied to be a Fulbright specialist in the Fulbright Program and will be able to apply for Fulbright-related projects all over the globe.

“I think you need to always keep learning, and that’s so important,” she said. “Don’t just be satisfied with the status quo. Everything I’ve gotten to do, I’ve gotten to do because I kept learning and I kept asking questions and I kept meeting people. It’s intimidating to put yourself out there but that’s how you meet new people.”

She added, “I taught with people who were very good teachers but they rarely sought anything outside our school or our district, and I think they missed things that they could have shared of themselves or learned from others.”