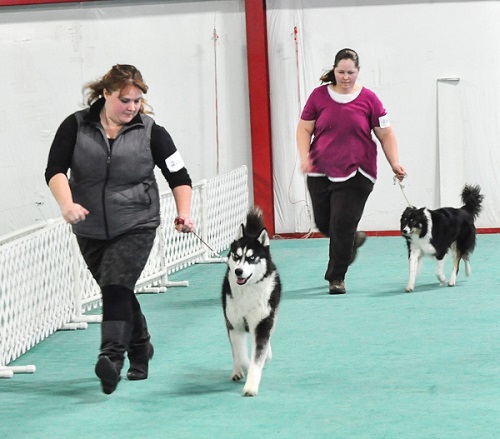 NIU’s mascot Mission stole the show in March, but it wasn’t from the attention he usually gets at a sporting event. He actually won a championship title at a dog show.

At a United Kennel Club show in Huntley, Ill., he was awarded the championship title after winning best in show and reserve best in show. He also won two ribbons for best of breeds.

Since last year, the 3-year-old has been in eight conformation shows. He took home two ribbons for reserve best in show in 2014 and has earned multiple awards for best of breeds.

In conformation shows, Mission is judged on how he measures up to his breed standard, whether he’s competing with other Siberian huskies or other breeds. Since he is neutered (altered), he has to participate in shows for that classification.

Monge and Karen Street, Mission’s other owner, run the Shiver Siberians kennel in Marengo, Ill., and show many huskies. Three other huskies participated in this last show: Star won best in show and reserve best in show; Shiva earned a perfect score in rally obedience and her first UKC rally obedience title for level 2 (off leash); and Stealth won third overall in the puppy match.

Monge plans to enter Mission in his first rally obedience competition in May. This dog sport, which combines agility and obedience, requires the dog and owner to work as a team as the dog performs exercises on a course of stations.

The dog shows are good for Mission because “it is another activity that drives his mental exercise,” Monge said. “And he loves to show!”

If Mission could talk, he’d probably say the treats that he receives for his performances are another good reason to participate.