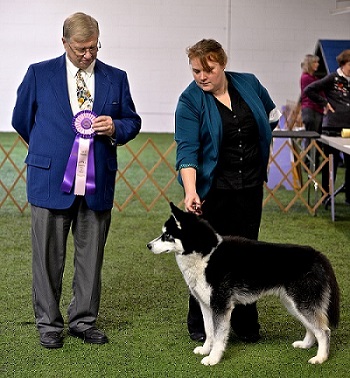 Unlike most mascots, NIU’s Mission has started a second career as a show dog and is proving to be a natural.

At his first conformation show in February in Geneva, Ill., the Siberian husky was awarded best in breed by the United Kennel Club and competed further to receive reserve best in show.

The United Kennel Club allows dogs who have been spayed or neutered to participate in conformation events as long as they have a pedigree. Mission is a neutered dog and has a pedigree.

“It’s a good exercise – especially for Mission since he’s around so many people – to have him stand there and not want to give the judges a kiss and do all the fun things that he likes to do,” said Karen Street, a Marengo resident who owns Mission with Lisa Monge of Sycamore.

Street and Monge run the kennel business Shiver Siberians and are accustomed to showing huskies. They show about four huskies 10 to 12 times a year.

The conformation show validates that Mission, who weighs about 55 pounds, is the standard size of the breed and is correctly bred, Street said.

But the odds were in his favor since both of his parents were show dogs.

“He did exceptionally well,” she said. “We are very proud of him.”

To prepare for his appearances as a mascot, Mission is working with Monge and NIU ROTC cadets, who will handle him during events. They are exposing him to different areas on campus to make sure he can tolerate loud noises and large crowds.

Mission definitely loves students and is allowed “cuddle time” when he comes on campus for training, Street said.

“Cadets love working with Mission and I think he likes working with us,” said Lt. Col. David Dosier of the Huskie Battalion. “We’re an organization that really values camaraderie, so Mission fits right in.” 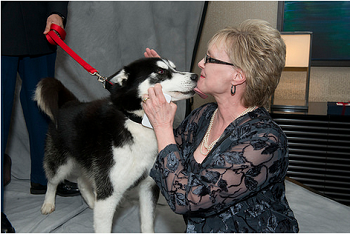 He is also learning manners and tricks. For instance, he is practicing a modified pushup. ROTC cadets are known for doing pushups when a touchdown is scored at Huskie Stadium and the hope is that Mission can join them.|

Treats and toys are used to motivate him and a foam football is one of his favorites because he can catch it.

“He’s an enthusiastic learner, but there are certain things that just don’t make sense to him. So you have to make a husky believe it’s his idea,” Street said. “I think that’s how they’re working with him to do the bow.”

The 2-year-old has already been booked for a few appearances. He attended a basketball game and wrestling match in February and donned a bowtie during cocktail hour at the Red and Black alumni event in March. His next stops are an NIU baseball game and the Child Development Lab in April and a wedding in May.

NIU organizations and the public can make requests for his appearance by visiting the NIU Alumni Association’s Mission website.