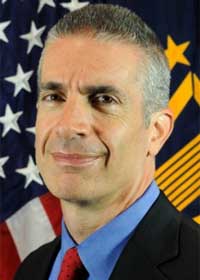 Andrew Traver has served as the fifth civilian Director of the Naval Criminal Investigative Service (NCIS) since being named to the post in October 2013.  In his role, Traver leads the agency as it investigates and defeats terrorist, foreign intelligence and criminal threats to the United States Navy and Marine Corps on land, on the water, and online.

A 26-year career veteran of the Bureau of Alcohol, Tobacco, Firearms and Explosives (ATF), Traver began as a special agent in 1987 in Chicago and investigated violent gang-related crime and violations of federal firearms, narcotics and explosives laws. He was also a training officer and fully deputized member of an Illinois State Police narcotics task force.