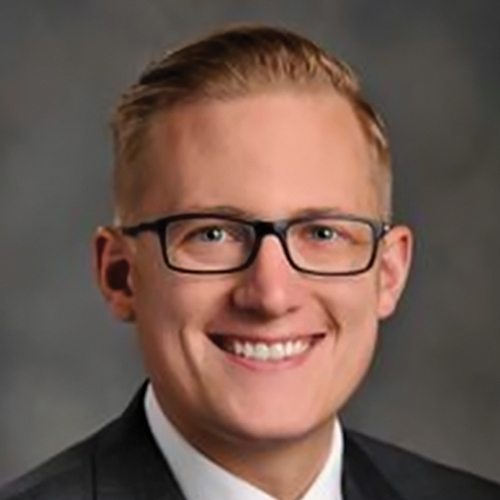 Adam Cox’s then-girlfriend Shawna said, “If you want to be with me the rest of your life, you better go to the career fair and figure out what you want to do…”

Twelve years later, he’s with the exact firm he interviewed with on that fateful day in March of 2005. He is now Managing Director at Northwestern Mutual- Elgin, leading an office with 10 full time financial advisors (two NIU alumni) and six to 10 college financial representatives (currently two NIU Students). Adam represents his company as a corporate partner for the last five years on the NIU College of Business’ BELIEF Board.

Adam Cox graduated from Bishop McNamara High School in Kankakee, IL, then proceeded to attend Parkland Community College in Champaign for two years. He was recruited to play basketball and earned an associate’s degree in marketing. After two years at Parkland, he attended the University of Illinois at Urbana-Champaign, graduating in 2005 with a degree in speech communication.

Being attracted to the opportunity Northwestern Mutual provided, one of having the opportunity to have an impact as well as the lifestyle it offered, Adam said the recruiter made him feel like he was the only person in the room. He knew right then and there that was what he wanted to do for the rest of his life.

He started at Northwestern Mutual as a Financial Representative, but soon got the added responsibility of being the College Unit Director. This entailed overseeing the internship program along with his normal duties as a Financial Representative. Being able to interact with college kids was a way to get to know them. Adam was not that far removed so he was able to easily relate to them and enjoyed watching a 20-year-old student grow and evolve within the internship program.

Even with advising and running the internship program, Adam wanted to do more. He moved into the role of Recruiting Field Director. There, Adam was in charge of recruiting and developing new representatives that joined the business. He enjoyed this role because of the opportunity to impact exponentially by teaching others what was taught to him by his mentors, Wendy and Jim. Adam then became Managing Director, much like being recruiting field director, but running the office in Elgin.

“Having an impact and legacy can be stressful and challenging, but in life, we are forced to grow, and there gets to a point we aren’t forced to grow and it’s all about choice. I saw my Dad and how hard he worked in corporate America, and I saw what it took for him to be a part of things, like my games, and he did a phenomenal job, but I also saw how hard that was. My wife and I believe in living a life by design, not a life by default in being the maker of our own destiny and making our own calendar.”

With the ability to create his own calendar, Adam is able to take his daughters to breakfast every Wednesday, sharing lessons like, “We become what we think about.” Adam was first exposed to ethics as a kid. He learned that “trust is like a bank account; it takes a long time to build it up and one stupid mistake to lose it all.”

These thoughts governed his behavior and was great exposure to ethics. This prepared him for the day-to-day ethical issues he would face in his career. “We are dealing with people’s livelihood’s, life goals and aspirations. People rely on us to provide sound solutions and advice. Unfortunately, there are still advisors out there who don’t act in a client’s best interest and we know the Bernie Madoffs of the world exist out there.”

Not only does Adam need to act ethical, but in his field, his clients need to be ethical as well. For example: if a client is a smoker, they may be able to get a lower premium on life insurance if they don’t smoke, but need to make the ethical decision to be truthful.

“I don’t envy younger millennials; a lot of companies are setting them up to fail in my opinion. It’s one thing to have a fun environment that fosters growth, but we must remember they are impressionable and are setting forth habits in life that will dictate their future. It’s our job as leaders to put people in a position to be successful, and as we tell our daughters, they need to be the best version of themselves.”

Adam has been involved in the BELIEF Program since Northwestern Mutual-Elgin has been in existence. Northwestern Mutual corporate headquarters was involved with a similar program at a school in Arizona, and when they found out about BELIEF, Adam says, “It was a no brainer.” The woman who originally recruited him thought that he should be the one to get involved, and Adam was excited to have an impact on the community and recruit potential advisors, as well as being in line with the desire to impact and grow the firm with the right people. Adam is still a part of the group because of the people. He has surrounded himself with individuals he respects who keep him engaged and part of the college. He gets a lot out of it.

Going forward, he believes that the BELIEF Program needs to cross pollinate. “I feel like we are one of the most undervalued, underutilized programs on campus. In my opinion, we need to better educate others on campus to the impact we are having. Providing young adults with the tools to maneuver through real life scenarios with an ethical foundation is HUGE. It’s not a matter of IF someone will be faced with anethical dilemma; it’s a matter of WHEN. I believe we all want to do good, but we need the skillset and background to arrive at the right method of walking through ethical decision making. Everyone can benefit from the BELIEF decision-making model; from sales, to engineering, to computer science.”

What is something you wish you knew as a student that you would like NIU students to now know? The power of visioning and the power of thought. I wish when I was 20, I would’ve had a clearly laid out vision of what I wanted to accomplish in my life. I wish I would’ve identified a mentor, someone I could learn from, from a young age. I wish I was involved more in college and less complacent. With the idea of diversity and inclusion; I could’ve learned so much outside of my comfort zone, expanding my comfort zone early, getting out of it early. We become what we think about. Our minds are so powerful and that’s why I’m so excited when I speak to students.