Students Connect With Alumni and Their Businesses 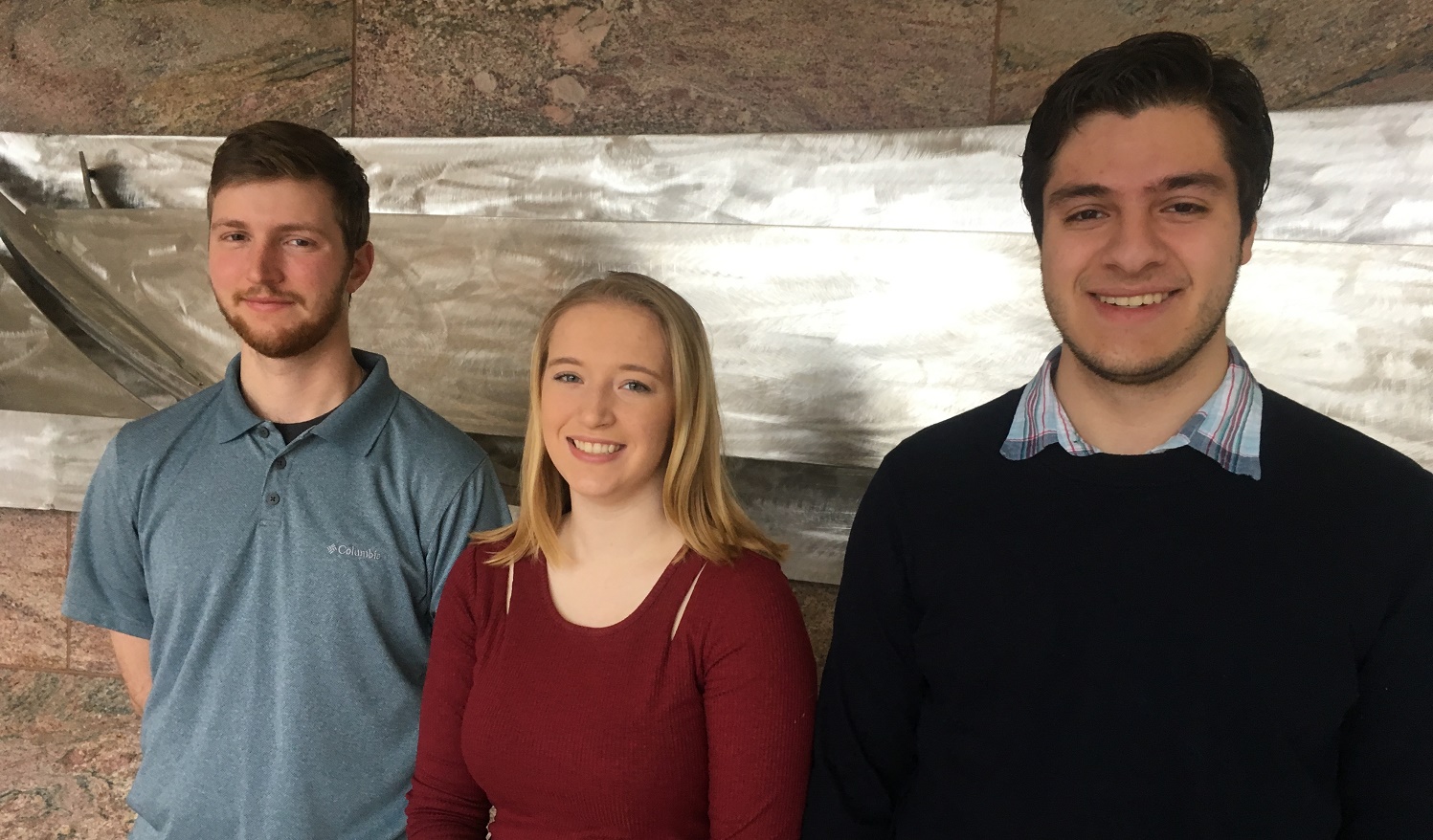 Jake Goes, Cassandra Kamp and Esteban Molina Hoyos (from left) were among the first students to participate in a new externship program offered at Northern.

Like many students, Mary Carter questioned whether she chose the right major. Carter, a senior in the electrical engineering program, wanted to be part of a new externship program at Northern Illinois University to get a better idea of life after graduation.

The program, a collaboration between the University Honors Program and NIU Alumni Association, matches alumni mentors with honors students to forge connections and give students a chance to understand their career options.

The externship gave Carter an opportunity to observe and network with engineers and learn about job openings. Over winter break, Carter worked with a senior engineer on a case study presentation at ICU Medical in Lake Forest and toured the medical supply company and Underwriters Laboratories (UL) in Northbrook to explore her career options.

Networking with engineers was one of the greatest rewards for Carter and other engineering majors. Carter and the engineer that she worked with at ICU Medical connected on LinkedIn, and he told her to message him anytime if she has questions.

“I really enjoyed getting a chance to talk with the employees about their experiences and how they got to the point that they’re at,” Carter said. “It helped give me an idea of a career path and what to expect.”

When the students toured UL, some of the engineers told them that they were hiring, so Carter is keeping the company in mind for employment.

Two other engineering students also feel confident about their major after working with a mentor at ICU Medical during break.

Esteban Molina Hoyos, a freshman studying mechanical engineering, discovered career paths that he didn’t know existed and saw the potential to work in many industries after talking with engineers there.

“Before my externship, I was considering changing majors,” Molina Hoyos said. “But my experience at ICU Medical made it easier for me to commit to years of study to enter a profession I now know I will enjoy.”

Jake Goes, a senior in the electrical engineering program, worked on small projects in research and development at ICU Medical and was impressed with the collaboration among engineers and other professionals.

“Not having done an internship at a large engineering company, I got the experience of working in a medical device company,” Goes said. “It made me realize that I chose the right field.”

He feels excited about his future and can’t wait to begin his career.

“I could easily see myself working for ICU Medical because I had such a great experience,” Goes said.

Cassandra Kamp, a freshman majoring in both psychology and rehabilitation and disability services, was inspired by her alumni mentor, John Butler ('92, M.A. '94). He introduced her to the operations of Painters District Council No. 30 (PDC 30) in Aurora, where he works as the communication and strategy director and assistant fund administrator.

Students are typically used to family and teacher-student relationships, but they also need professional, career-oriented relationships in the workplace, where the focus is on teamwork and rewards are based on day-to-day performance, according to Butler.

Because the externship allowed Kamp to work in different departments and learn about the roles of the business, from marketing strategies to union benefits, she learned how to adapt to a professional work environment and is more confident about her ability to network.

“The whole experience made me excited about my future,” Kamp said. “I’m excited to be part of something. I’m excited to establish relationships with my colleagues, the way the PDC 30 staff does.”

She was also inspired by Butler's dedication, passion and intelligence and views him as a role model.

“Guidance and support outside a student’s family and friends promote growth,” she said. “John inspired me to be ambitious and work hard for my aspirations.”

The most useful aspect that mentors provide is honesty and frankness, Butler said, and the job entails offering constructive criticism and advice that challenge a student’s comfort zone.

Butler had mentors during college and in his profession and says he can’t imagine life without them.

“They helped me shape my aspirations, respond to challenges and evaluate opportunities. They offered me reasons for believing that one course over another might be preferable and encouraged me to remain curious and experiment,” he said. “They told me when they believed I had done something extraordinary and when I was failing to use my talents wisely.”

Butler believes Kamp established credibility and showed her potential as she exposed herself to uncertainty and risk associated with starting at an organization. As a result, he said, she is more likely to seek challenges and advance at a faster pace than her peers.

The externship program will be expanded by offering additional fields for students to explore so they are more informed about career options after graduation, said Director Todd Gilson of the University Honors Program.

After the externship, Gilson heard students talk about the connections they made and the steps that they need to take to begin their career. They have begun the initial steps to become a professional, he said, even if it was a small step toward success, such as creating a LinkedIn profile.