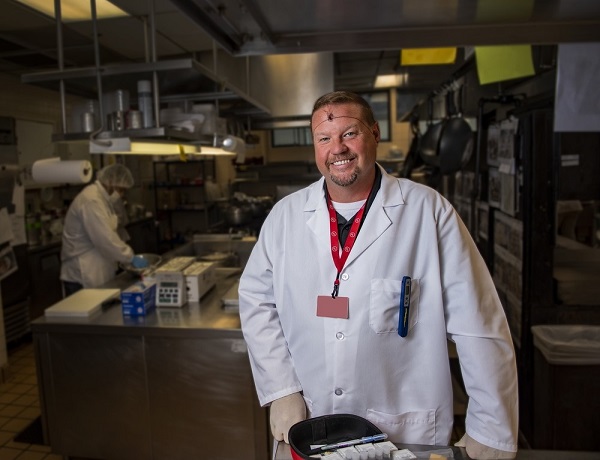 David Banaszynski is a standout alumnus who is improving public health in his community and the state.

David Banaszynski, ’97, has devoted his life to making a difference to protect the public's health in the community and across the state.

On the job as an environmental health officer for Hoffman Estates, his work includes inspecting food establishments, day care facilities and public pools, working with architects on business designs, providing assistance to customers on identifying insects that creep around their homes and finding ways to reduce the blood-sucking population of mosquitoes.

Outside of his regular duties, Banaszynski is a member of the State Board of Health and president of the Illinois Environmental Health Association. As a health advocate, he works with Illinois legislators to pass health-related laws. He is currently working with the Centers for Disease Control and Prevention and the Illinois Department of Public Health to pass regulations that would make public pools safer.

He is also a member of the Illinois Medical Emergency Response Team, a volunteer group that responds to disasters and provides medical care.

“I want to leave a legacy of having improved the lives of people, whether they hear about it or not,” he said.

When Banaszynski realized that he wasn’t going to have children, he became fully dedicated to his profession.

“I don’t like working, but I love what I do,” Banaszynski says kiddingly. “I would rather be in the Northwoods fishing.”

Northern Illinois University impacted his life because it was where he learned to deal with a diverse group of people, it challenged his norms and it expanded his perceptions.

Like many accomplished alumni, he didn’t always have the best grades. During his sophomore year, his grades were poor, but he wanted to be a member of Sigma Phi Epsilon, which required a 3.0 grade point average. So he made his classwork a priority and learned how to manage his time with a counselor’s help.

His list of favorite NIU memories is extensive – tearing down the goalposts at a homecoming game, beer nuggets, football games, Molly’s, the Sigma Phi Epsilon house and driving down country roads. And then there was the incident when he was kicked out of his dorm room during finals week for blaring music during quiet hours. All things considering, he is standout in his civic duty and is making a difference in his community and in the state.