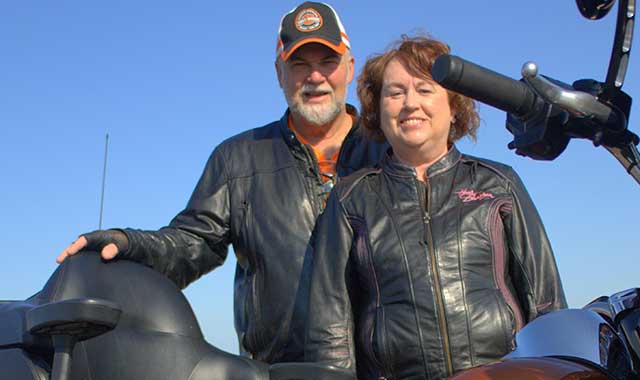 Mark Schwendau is a technology guru on the job. But off the clock, he cruises on his motorcycle to find remnants of Illinois stagecoach trails.

Mark Schwendau, ’76, M.S. ’90, has spent his career working with modern technology to teach drafting and design. However, in his free time, he is cruising on his motorcycle across northern Illinois to trace old and forgotten trails of history.

He sets out on his adventures with wife Karen to trace Illinois stagecoach trails, which began the formal infrastructure for travel about 200 years ago. They enjoy following the Galena-Chicago trail, which includes Elgin, Genoa, Byron, Lena, Warren, Scales Mound and of course Galena.

“When you see an old house or barn built of Illinois limestone, odds are it dates back to stagecoach days,” Schwendau said.

He wrote an article for the Northwest Quarterly magazine last year to trace the Galena-Chicago trail, where stagecoaches traveled about 5 miles per hour. According to the article, traveling one way from Chicago to Galena cost about $12 in the early 1800s and the trip took an average of five days on the 165-mile route.

“People open up to me and tell their stories,” he said. “After several people talked to me about their stories of their towns and the stagecoach trail, and considering Illinois is 200 years old this year, I decided I should write about it as too much history is being lost and forgotten in time.”

Along with passengers, the stagecoaches carried mail, small parcels and newspapers. Sometimes the travel meant having brushes with Native Americans or outlaws on isolated stretches.

When Galena was incorporated in 1826, the town was more prominent than Chicago and had a population close to 10,000, Schwendau said, whereas Chicago was incorporated seven years later with a population of only 4,000. Galena was propelled by lead mining and steamboat access to the Mississippi River at the time, but its growth spurt ended abruptly when miners began chasing California gold in 1848, he said.

In the video, Schwendau and his wife are on their motorcycle going past the historic YMCA building at the corner of State and Madison streets in Rockford during the Fourth of July Parade. The YMCA site used to be the Rockford House Inn, which was the first stagecoach inn built in Rockford (known as the village of Midway until 1837).

A year after retirement, he went back to work out of boredom and took a job as a technologist for Accurate Metals Illinois (AMI) in Rockford, where he prepares CAD drawings for customers and computer-aided manufacturing programs for the company.

To give back to his community, Schwendau recently helped start the first Illinois community café affiliated with the nonprofit organization One World Everybody Eats, which offers pay-what-you-can cafés for residents and brings communities together. He serves on the board of the café, called the Kitchen Table, and is the webmaster of KitchenTableRochelle.org.

His drive to help others and grow as a professional and individual stems from Northern Illinois University professors, who taught him to be a lifelong learner.

Schwendau realized how much he had learned in his profession when he stumbled across his NIU transcripts and compared those classes to what he was teaching as a college professor.

“Since I had made the transition from T square, to drafting machine, to CAD computer, in my professional life, I was stunned that only 20 percent of my major courses actually were analogous to what I was teaching in my CAD program at Kishwaukee College,” he said. “That means 80 percent of what I was teaching had yet to be discovered when I was an NIU student just 30 years prior.”

Since many hours were spent in Still Hall and Still Gym to study technology, Schwendau said, he gets choked up every time he passes them during campus visits. His favorite hangout off campus was the Candlelight, which used to be where McDonald’s is now.

“All of my technology professors were very dear to me,” he said, “even though almost all of them have now passed away.”

He is keeping former welding professor Roy Hulfachor of Genoa on his radar.

“Since I have been at AMI now for almost a year, I have been thinking about looking him up to invite him for a plant tour and take him out for lunch," he said. "Welding and metals were kind of a special interest to me after my major of drafting and design. Roy was truly an outstanding educator and all of us loved him.”