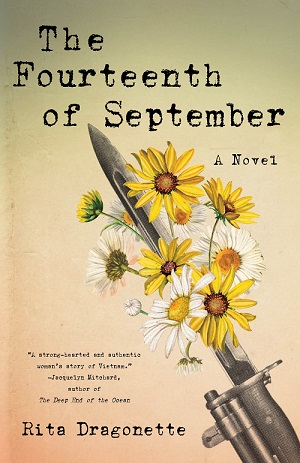 Meet Rita Dragonette on Oct. 25 as she chronicles the Vietnam War and compares the time period to today's social unrest.

After working in public relations for three decades telling other people’s stories, NIU alumna Rita Dragonette is telling her own story and is marking the occasion with connections to Northern Illinois University, including the creation of a student scholarship.

Dragonette chronicles her experiences as a college student during the Vietnam War era in her first book, titled “The Fourteenth of September,” a coming-of-conscience novel.

Dragonette will return to NIU on Thursday, Oct. 25, to participate in a series of events relating to the book’s launch. She will conduct a reading/book signing at 12:30 p.m. in Altgeld Hall, Room 315. A panel discussion with Dragonette and NIU faculty and students who were on campus during that time will take place at 4:30 p.m. in Cole Hall, Room 100. Both events are free and open to the public.

“I was a student during two pivotal events – the first draft lottery in 1969 and the Kent State shooting in 1970,” she said. “Like other college campuses across the nation, NIU was enraged. There were riots, and for two days, we camped on the bridge near the lagoon. The National Guard was brought in.”

The book, which took 12 years to write, chronicles the inner struggle of Pvt. Judy Talton, who arrives on campus on a military scholarship, which is her only means of attending college. By the fall of 1969, she starts questioning the war and her role in it. On her 19th birthday, Sept. 14, she secretly joins the campus counterculture, which ultimately leads to her being forced to make a life-altering decision.

Talton's journey mirrors Dragonette’s experience at NIU – arriving on campus as a nursing major on a U.S. Army scholarship.

“I didn’t believe in the war and became politicized,” she said. “I wanted to follow my passion and become an English major, but I was fearful of losing my financial support.”

“Like so many other students at NIU, my family didn’t have the money for four years at college,” Dragonette said. “I had adjusted my dreams to study what my scholarship would pay for. Yet, because it was a military scholarship at the time of an unpopular war, the bargain I’d made with myself became increasingly uncomfortable, to the point where I had to make the decision of my life – my personal coming of conscience.”

As the nation marks the 50th anniversary of the unrest of 1968 and the Vietnam era, Dragonette believes the lessons illustrated in her book are timely in today’s turbulent times.

“The similarity of that time and today is staggering, as is the equal need for meaningful activism and bold personal responsibility,” she said. “In this spirit, as part of the launch of 'The Fourteenth of September,' I’m funding a 'Coming-of-Conscience' scholarship for an NIU student.”

Students interested in the scholarship can contact the NIU Scholarship Office at 815-753-1395 for details on how to apply.

“The Fourteenth of September” has been designated as a finalist for two 2018 American fiction awards by American Book Fest and has received an honorable mention in the Hollywood Book Festival.

Dragonette, who has been honored with distinguished alumni awards from the College of Liberal Arts and Sciences and the NIU Alumni Association, graduated with an English degree in 1972.