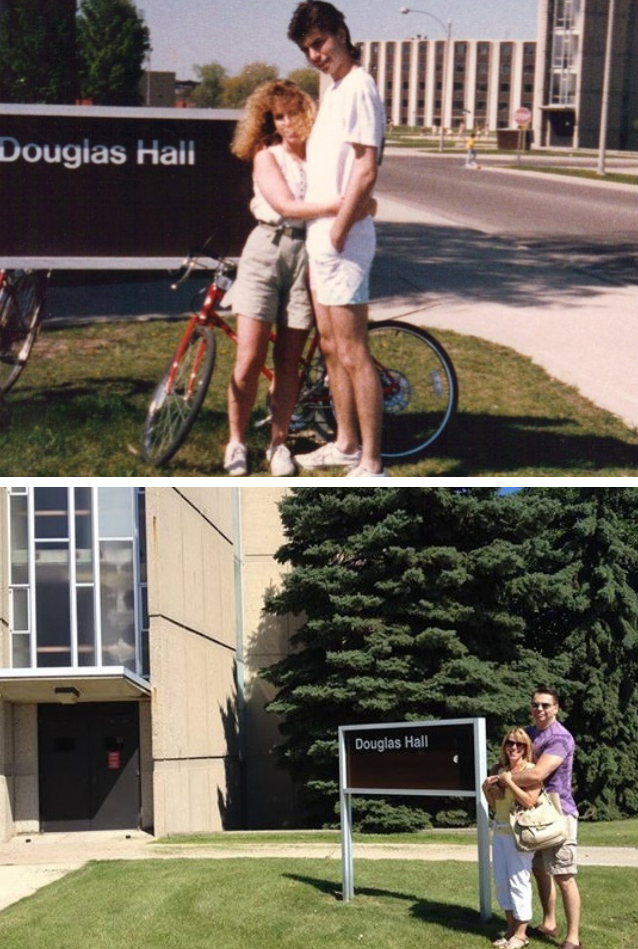 Award-winning writer Julia Tagliere shares her story about coming back to campus with her husband and children and reuniting with "ghosts" in Douglas Hall.

When I first met my husband, we were college freshmen, just starting off the year. We lived on the same floor of the same dorm, and right from the start, we knew This Was It. We lived and dated there for three years, moved into awful off-campus housing, married after graduation, are raising three wonderful kids and just celebrated our 25th wedding anniversary.

When we learned that Douglas Hall, the dorm where it all began, was about to be demolished (to make way for, what else, a parking lot or a through street or whatever), suddenly, looking back seemed not only like a good thing to do, but also a moral imperative. So on a trip back to visit our families nearby, we decided to squeeze in a road trip with our kids to show them our old stomping grounds — and to say goodbye.

We didn’t know what stage of the building’s demolition awaited us. Personally, I thought I’d just be happy if we could snap a picture of us in front of the building sign, a bookend to one taken of us a few weeks after we first started dating.

We drove slowly on our way to campus, but the conversation was lively. Our kids, generally uninterested in any stories prior to their births, were suddenly filled with questions about our early days together, and my husband and I happily answered them, laughing, squeezing hands and exchanging knowing smiles at carefully censored details.

As we turned onto the street where our dorm had stood so many years before, I couldn’t yet see if it was standing or not. In the years since we’d graduated, the university had erected large columns and now-mature trees that blocked the old wide-open view, and I found I was holding my breath.

There! There it was, still standing. I couldn’t help it — I squealed and my kids erupted with teasing laughter. My husband parked the car and I practically skipped across the street to the old dorm sign. Building and sign had not changed a bit. We posed again with the sign, letting our daughter snap some pictures and marveling at the changes that had sprung up around our old building (artfully ignoring the changes time has wrought with us): the enlarged rec center kitty-corner from it; the upgraded stadium across the street; the new athletics practice facility. It was a surreal mix of the very old and the very new, and the silence of a summer-empty college campus only served to heighten the feeling that Time had graciously decided to stop for a few hours and let us wander around in peace. 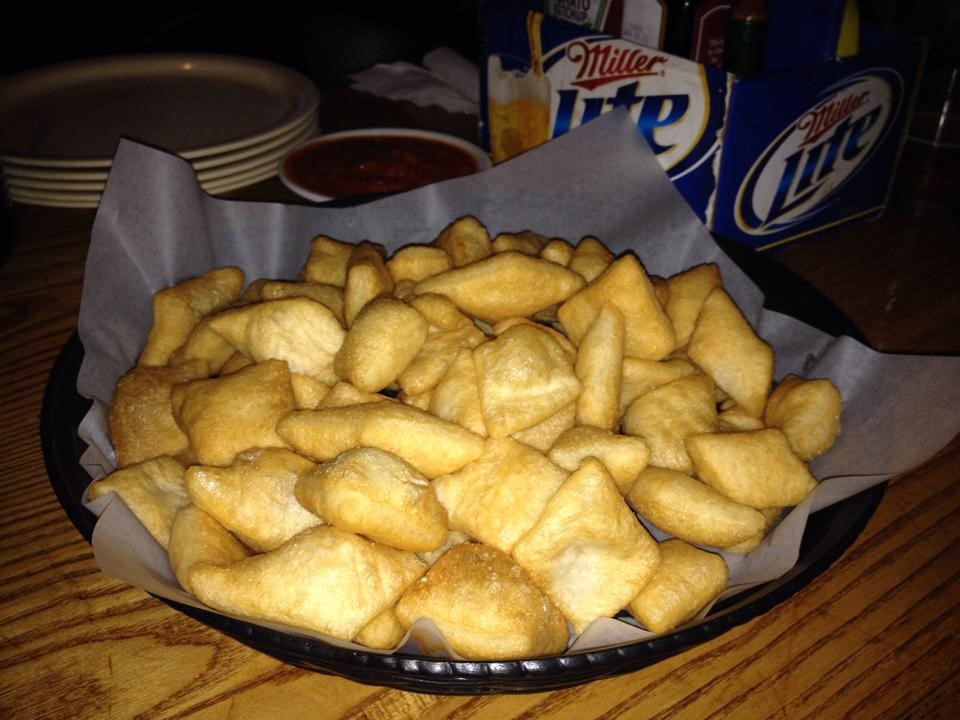 We were, indeed, planning on strolling around the rest of the campus next — visiting the rec center where we both worked; hunting for an establishment that would serve us our much-loved and much-missed beer nuggets; stopping at the campus bookstore to pick up some university gear — but then my husband suggested we walk around the front of the dorm.

Assuming we’d just stop at the entrance and snap a few pictures there, I followed my family around to the two sets of double steel doors we’d walked through so many times during the three years we lived there.

One set was chained.

The other was not.

We saw no signs about condemnation, no warnings against trespassing, no contractors busy dismantling our past. So my husband tried the door — it was open.

Well, what would you have done? Probably the same thing we did — which was to creep inside the building, looking around for signs of security or construction crews or campus police (not our first time doing that on that campus). But the place was deserted.

We began to wander. With each step, my heart pounded harder, a delicious combination of the fear that someone would stop us and the thrill of long-forgotten memories thundering through me. Every step, every breath, every turn brought another memory, and we marveled at the most prosaic of items — our kids must have thought we were nuts. 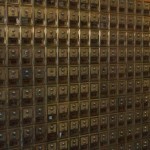 “Remember these stairs? God, how many times did we trudge up and down these?”

“Look! The cafeteria!” We assured them that we were never that excited to see it when we were students — well, except when we were making out in the line before dinner. That was exciting.

We made our way up the stairs, constantly waiting for someone to stop us, to tell us we didn’t belong here, but the continued silence and lack of pursuit only solidified our feeling that we did — we did belong here, at least once upon a time.

As we reached the security door to our floor — one of two that since my room was so close to it, I had to open a gazillion times for neighbors who’d forgotten their keys — I held my breath again. Surely this would be where our tour stopped; in three years, that door had never been left unlocked. But once again, it was miraculously open, an all-access invitation to enter.

We stepped through the door, and in the absolute, empty stillness of the hallway, I suddenly felt we were stepping on hallowed ground.

Crappy artwork, some of which we recognized from our days, still adorned the walls, preserved under plexiglass plates screwed into the walls; obviously, it had been deemed unworthy of rescue by the salvage crews who had already cleaned out everything else in the building of possible value or hazard.

The room doors were just the same: heavy, thick, still painted the same ugly green, but with one new feature: large, penciled X’s slashed across each door — This Room Is Clean. Well, empty, at least — what decades-old college dorm room could ever be called clean?

Ghosts met us at every turn, faces we hadn’t seen in years, and as we described their antics to our kids — and some of our own, though not all, wink, wink — I could almost hear them coming back to life all around me. Thumping music; the heavy, thunk-slam of the security door; the constant thrum and hum of youth and energy and The Future rose like a mist from the very floor. My kids blamed it on the odor of stale, spilled beer and unwashed college bodies. They were partly right, but only partly: I knew it was The Past walking beside us.

When we came to the door of my husband’s room, he paused, took my hand and gave me a wicked grin.

“Remember this?” he asked. I could almost hear my kids gagging behind me. Oh, to have had a few minutes alone right then. But I just smiled.

We showed the kids inside our rooms, agreeing with them that they were ridiculously small; that the rickety plastic doors on the closets were crappy; that the towel racks mounted inside the cabinet doors over the radiators — for “drying” your towels after your trip to the communal showers [Ick, was our kids’ consensus]  — were hilarious by today’s standards; that squeezing two roommates into rooms that size amounted to a human rights violation.

But inside, we were remembering other things: the day my husband first kissed my hand; rare, lazy afternoons crammed up against each other in his tiny dorm bed, watching classic movies (some days it was Action Jackson; some days it was The Quiet Man) on his cutting-edge VCR; late-night sprints to the lobby, three dollars in hand, to catch the beer nugget truck before it pulled away; idyllic between-class hours, hours and hours, filled with exuberant, greedy, young love.

As our time (and our kids’ kind indulgence) ran out, we finally headed down to leave the building. Though worrying that someone would stop us or arrest us for trespassing, I stopped and took one long last look back. Knowing with 100% certitude that, unlike the last time I left this building “for the last time,” I would never see this place again, I offered up — what, a prayer? A silent thank-you? — to whatever powers that were that day, my heart full of gratitude at having been allowed to cross that threshold of time again, to walk those floors, to feel those feelings, to remember those now-halcyon days of our extreme youth. It was an unparalleled gift, one I hope never to forget, long after the day arrives when only a road or a parking lot covers the place where so much of my life began.

Goodbye, Douglas Hall, and thanks for the memories.

Julia Tagliere, '91, spent several years teaching high school Spanish and French before deciding to concentrate on her writing. Today, her work has appeared or is forthcoming in The Writer, The Bookends Review, Potomac Review, Gargoyle Magazine, Washington Independent Review of Books, SmokeLong Quarterly, various anthologies, and the juried photography and prose collection, Love + Lust. Winner of the 2015 William Faulkner Literary Competition for Best Short Story and the 2017 Writers Center Undiscovered Voices Fellowship, Julia resides in Maryland with her husband (Eric Tagliere, ’91) and their family. She recently completed her M.A. in writing at Johns Hopkins University and serves as an editor with The Baltimore Review while working on her next novel, The Day the Music Didn’t Die. You can find her at justscribbling.com.