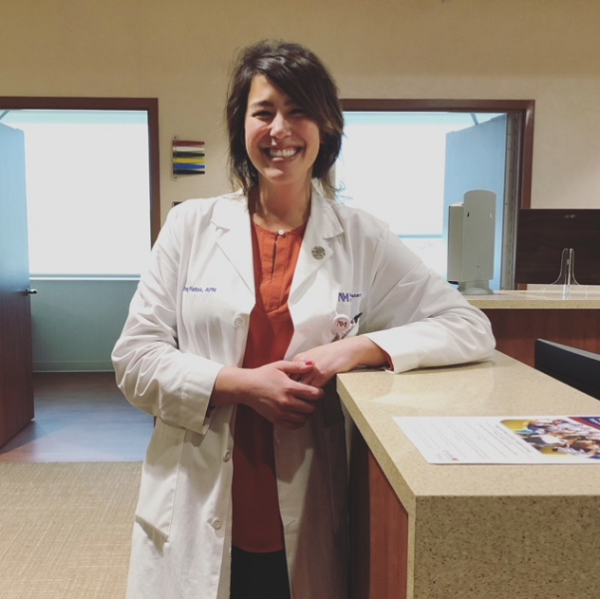 The care and compassion that Spring Piatek experienced as a sick child led her on a path to a career in health care.

When Spring Piatek was treated for Kawasaki disease at Children’s Memorial Hospital in Chicago at age 4, she remembers a nurse staying with her in the middle of the night to tend to her fever.

The nurse gave her a grape Popsicle to soothe her raw throat from crying and reduced her fever by placing cool rags on her forehead. She sat by her side and talked with her to calm her down.

“It was a simple act, but something that I remember to this day,” said Piatek, who recovered from Kawasaki, an inflammatory disease that primarily affects children under age 5. “That act of serving and comforting the ill is what led me to become a nurse.”

She thought her calling was in pediatric nursing, but another experience convinced her otherwise. During an internship in nursing school at Northern Illinois University, she gained experience in the oncology unit at Rush Copley Medical Center and was impacted by a young mother who was being treated for leukemia.

“She was one of the strongest people I encountered and had an incredible impact on me,” Piatek said. “Caring for her made me remember why I chose nursing and made me realize that my heart and passion belong to oncology nursing.”

After graduating from Northern with a B.S. in nursing in 2005, she began working in the oncology unit at Rush Copley and was awarded Employee of the Year in 2007.

Despite her success, Piatek wanted to advance in her field and made the decision to go back to NIU part time for a master’s degree in nursing.

“It can be a tough decision to go back to school, start a new role or work for a new health care system,” Piatek said. “Over the years, I have always listened to my intuition.”

She graduated from the master’s program in 2013 with a 4.0 GPA and earned her license as an advanced practice nurse with a specialization in oncology.

“I think the overall structure of the nursing program at NIU prepared me extremely well. More importantly, the mentorship that I received from my professors and clinical instructors had the most influence on my nursing career,” she said. “I still keep in touch with many of my instructors that I had over 10 years ago, and I always appreciate their insight.”

After nine years at Rush Copley and her degree in hand, she was hired by DuPuge Medical Group and gained three years of experience in breast surgery and oncology. She then moved on to Northwestern Medicine in Winfield to work in the High Risk Breast Clinic.

Like the nurse that she had as a child, Piatek is there to listen to, comfort and provide guidance to her patients and their family members, who may be feeling anxiety and stress.

“The impact of a diagnosis of breast cancer can have a ripple effect on a woman’s life. It can impact her not just initially, but often times long after that initial diagnosis and treatment,” Piatek said. “Additionally, that breast cancer diagnosis may influence her family. Her daughters, sisters and relatives then wonder, ‘Am I also at risk for breast cancer? And if so, what should I be doing about it?’”

A young patient that she met last year at the clinic was referred because both her mother and sister had been diagnosed with breast cancer. During the visit, the patient shared that she had recently felt a lump. Piatek ordered diagnostic imaging, and that lump turned out to be breast cancer.

The woman is doing well and has finished her cancer treatment. She told Piatek that she and her family have initiated a charity and survivorship assistance for women with breast cancer to honor their mother, who ended up losing her life to the disease.

“These women are the heroes in my eyes. To have the opportunity to care for women like this, to hear their story and help them through what can be a very stressful time, that’s what it’s all about,” Piatek said.

She has a long list of educational training, including clinical breast exam certification and certification as an advanced oncology clinical nurse specialist and a breast care nurse.

“I feel very blessed to be able to work for a health system that supports nurses and encourages continued education,” she said. “I have a great manager and work with a great team of breast surgeons, radiologists and oncologists who support and provide mentorship for me.”

At the end of the day, her husband and daughter are reminders of what’s important in life, Piatek said, and she hopes that she is setting an example for her daughter.

“I hope to inspire a passion and work ethic in my daughter in whatever she chooses to do,” she said.