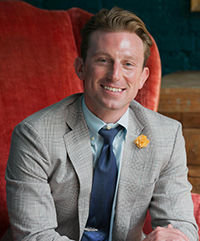 Jack of All Trades

Carmen Rossi never imagined himself as anything other than a lawyer.

“I do not recall, as a child, having the proverbial dream of being a fireman or an astronaut,” Rossi, J.D. ’12, said. “It was more, ‘Will I do corporate litigation or transactional law?’”

That variety of experience was one of the things that piqued the interest of Colin Zvosec, assistant director of membership and special projects at the NIU Alumni Association. Zvosec had never met Rossi before nominating him for the Outstanding Young Alumnus Award, but was fascinated by the College of Law alumnus’ accomplishments.

“Carmen came up as a Google alert from an interview he had done,” Zvosec said. “I read this interview and it interested me enough to lead me to do more research. I found his wide variety of accomplishments at such a young age extremely impressive.”

Rossi began several of his small businesses while he was still an undergrad at the University of Illinois Urbana-Champaign. When it came time to choose a law school, he wanted to be near Chicago, but outside the major metropolitan area.

“I appreciated DeKalb’s proximity to Chicago, but in truth, it’s still quaint and the class sizes were intimate,” Rossi said. “I think it’s really important in achieving academic success to have access to a professor, particularly in law, where you have more philosophical questions.”

About a year after graduation, Rossi was working for a civil litigation firm when he decided to invest in the Hubbard Inn, a restaurant property in the River North neighborhood of Chicago. Four years later, his restaurant holdings had grown to 13. Two more are scheduled to open this year. Today, his restaurant management company, 8 Hospitality Group, employs more than 900 people.

In 2014, Rossi started Chicago Knight Life, which offers meals and companionship to the clients of Chicago-based charities. Employees of 8 Hospitality Group are encouraged to perform volunteer work on a regular basis.

“Hospitality is not necessarily an industry you would think of for someone coming out of law school,” Zvosec said. “Rossi built his businesses and then leveraged the success of those businesses into charitable work in his community.”

Rossi says he always embraced the idea of community, a foundation that was strengthened at NIU.

“I had strong encouragement from administrators and faculty and inspiration from peers and classmates,” he said. “That sense of community and involvement and pride aided my success. If I could identify one common ingredient to success, it’s relationship building.”

That ability to build and manage relationships is demonstrated by Rossi’s apparent knack for political bridge building. When researching his nomination, Zvosec said he was impressed by evidence that Rossi can work with people on both sides of the aisle. He was appointed by Democratic Chicago Mayor Rahm Emanuel to the City of Chicago Landmark Commission and by former Republican Governor Bruce Rauner to the Illinois Economic Development Board.

“He has been nominated to committees by both Republicans and Democrats, which shows he is willing to work with people from a variety of backgrounds in giving back to his community,” Zvosec said.

Rossi now splits his time between overseeing his restaurants, real estate development and practicing law in his own law firm, City Lake Law, which focuses on government administrative law and lobbying. He also serves on the boards of several business groups.

“I never saw this future for myself,” he said. “But now I am proud to be able to say I work with and employ my former classmates. Those relationships founded at NIU are much longer than the three-year academic journey.”