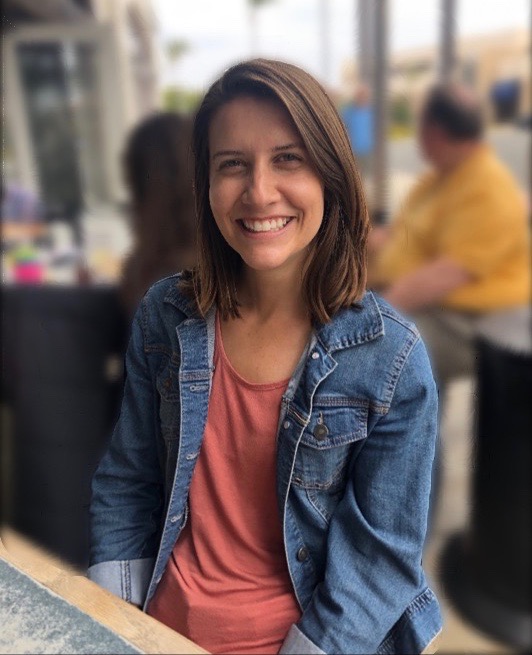 When Christina Hunger earned her Master of Arts in speech-language pathology from NIU in 2017, she knew she wanted to help young children with speech challenges, which she now does as a Pediatric Speech Pathologist for Early Intervention in San Diego. It wasn’t until later that she developed a curiosity about animal communications and how Augmentative and Alternative Communication (AAC) might be able to help humans understand what animals are thinking.

“I really didn’t know this is where speech therapy was taking me until I got Stella, my Catahoula/Blue Heeler mix dog,” Hunger says. “At that same time I was working with toddlers and children who use communication devices to talk, and every time I would see Stella whining or barking or going to the door to show us she needed to go outside, every time I saw her understanding the words we were saying, I just couldn’t stop thinking about how she needed a way to communicate with us. I knew that, if she can understand language, she should absolutely be able to use language.”

Hunger is quick to point out that AAC is everything we use to communicate that’s not verbal speech, and we all use it every day.  A roll of the eyes, different facial expressions, typing on a keyboard—that’s all AAC. Most humans have learned to supplement their verbal speech with AAC, but there are many people who don’t have verbal speech capabilities, and they use AAC as the foundation of their communication. Animals can also benefit from these types of communications.

Inspired by her curiosity and the work of other animal psychologists that have come before, like Dr. Penny Patterson who famously taught Koko the gorilla to speak through American Sign Language, Hunger set out to design a case study that would not only allow Stella to learn to speak but would also provide quantified data about how dogs, in particular, can learn to use language to express their thoughts and feelings.

Hunger used recordable buttons that Stella can paw to hear certain words, and she chose words she wanted to teach her dog and recorded each word into a different button.  She started by having all the buttons in different, appropriate locations in her house. So the “outside” button was by the door, the “eat” button was by her food, etc.  Stella was able to paw the button to hear the word aloud. To Hunger’s surprise, very quickly, Stella started making her own word combinations and walking across the room to combine words. That’s when Hunger decided to group the buttons on a common board for Stella, making the buttons appear as much like a human communication device as possible.

Hunger explains, “Something that’s really cool is that Stella has begun memorizing and anticipating the location of where each button is. This is a skill that humans often develop, called motor planning. For instance, when we’re typing on a keyboard, we just know where the keys are.  Stella knows where the different buttons are from so much practice, and this helps her to group words together easily and get her point across.”

So far, Stella is developing language very similarly to how a child would, with 22 words in her working vocabulary.  Hunger says that, in some ways, Stella is able to communicate on par with a two-year-old human child, pushing a series of buttons to communicate a full thoughts, such as “Christina bye," when her owner is leaving, or “"Park park play,” whens he is requesting to go to the park.  While she doesn’t possess as many words in her communications arsenal as a human toddler, the types of words that she’s using, the words that she’s putting together, and the ways that she communicates are very reminiscent of a toddler’s development.

“It’s really funny,” Hunger says. “If we ignore her for a second, she’ll stand on the button and stare at us so it repeats over and over. It’s like she’s saying, ‘Come on.  Someone listen!’”

Originally from Aurora, Illinois, Hunger also earned a B.A. in psychology from Case Western Reserve University in Cleveland, Ohio, in 2015. She chose NIU for her graduate studies because it felt so much like home, and the Speech-Language-Pathology program had a reputation for being extremely hands-on.  Its Speech-Language-Hearing Clinic offers students a practicum and research site that enhances their education while providing speech-language pathology and audiology services to the local community.

“When I visited NIU Speech-Language-Hearing Clinic for the admitted students’ day, I was just blown away by everything there,” Hunger remembers. “My first and most prominent clinical supervisor was Clinical Assistant Professor Michelle O’Loughlin, and she fostered my creativity, encouraged me to think outside the box, and helped me discover who I am as a speech therapist and as a person. Looking back, I think those are the most valuable lessons a teacher could ever give to a student.”

Hunger goes on to add that, during her time at NIU, the university culture really upheld the pillars of curiosity and creativity. Learning and teaching language doesn’t always rely on or produce black-and-white information, and Hunger’s professors encouraged their students to keep asking questions. This mentally has, no doubt, shaped her animal communications research.

When Hunger steps back and considers humans’ relationship with animals in society, she can’t help but think that it would be drastically different if we could understand what they felt and thought.  Through her work, she hopes to be a part of a new movement toward animal rights someday.

“Now I feel like I’ve seen the world through a different lens, and every time I see an animal, I wonder what they could say to me if given the right tools,” she says.

Follow Hunger and Stella’s progress on her blog, Hunger for Words.