NIU Team Climbs Mt. Kilimanjaro for a Great Cause 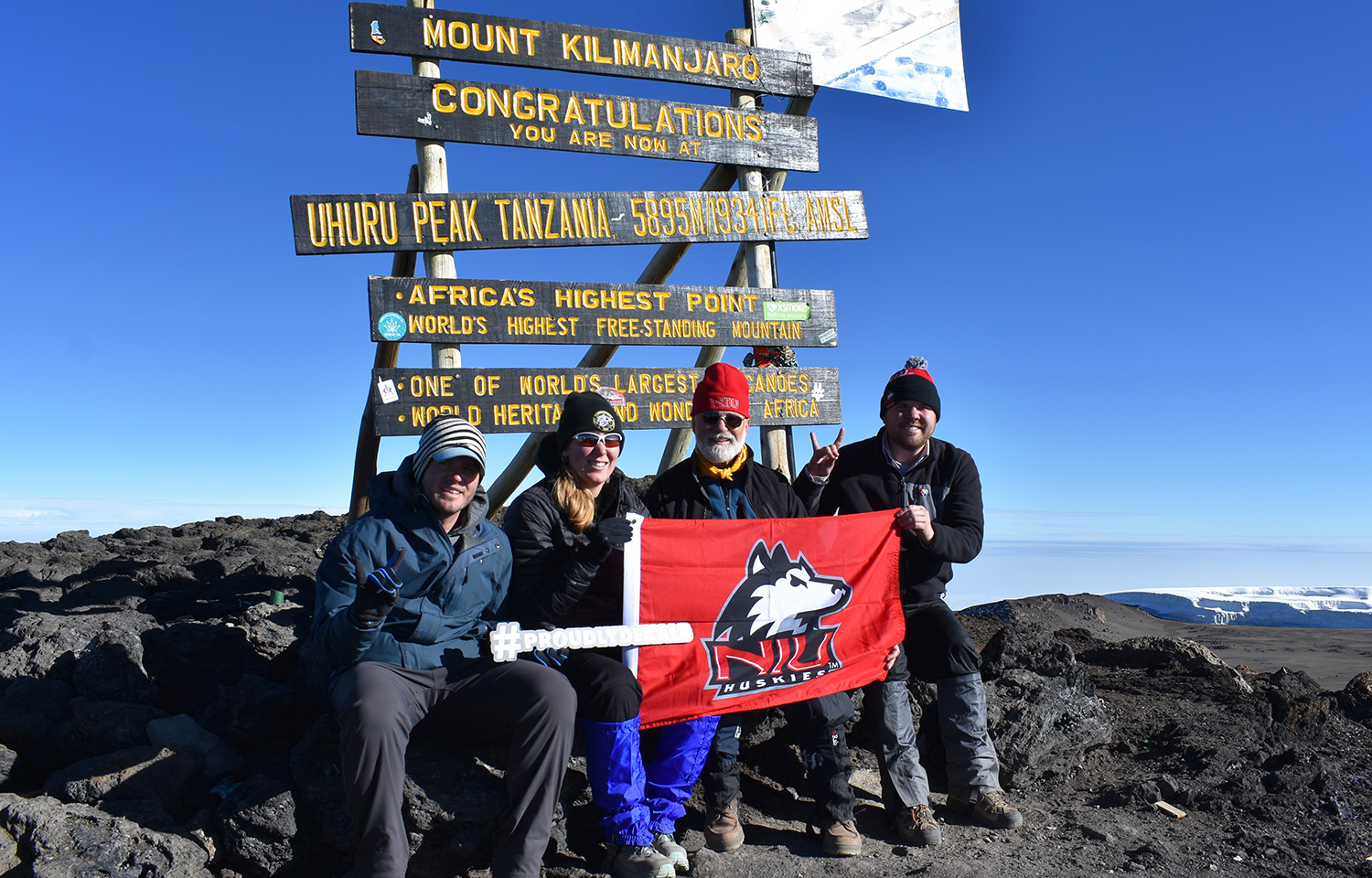 The best view comes after the hardest climb.  This bit of wisdom applies to the group of nine Northern Illinois University (NIU) staff members and alumni who made it to Mount Kilimanjaro’s 19,341-foot summit together in June. Headed by Dr. Kurt Thurmaier, the journey took a full seven days, but the climb really began in 2008, when he founded a nonprofit in Africa, beginning a lasting, meaningful partnership between the University and the Mara region of Tanzania.

Through his roles as chair of the Department of Public Administration and president of Tanzania Development Center (TDS), Thurmaier offers NIU students, faculty and staff, and friends of the University a rare chance to make a positive impact in one of the most impoverished countries in the world. In the last 11 years, his teams of students, NIU faculty, and volunteers from the community have done an amazing amount of work for people there.

Through this partnership, NIU students are able to enroll in a Study Abroad program called “The Role of NGOs in Development: An Engaged Learning Course,” where Tanzanian communities and nonprofit organizations are the classrooms.

“I love seeing students evolve their view of how the world works, and challenging their assumptions through the work they do with TDS,” Thurmaier said. “One of the reasons I wanted to do the study abroad program was because students who are raised in suburban Chicago think the world is one way everywhere. I also have students who have grown up in the poorest areas of Chicago. And these students think they know what poverty is, but when I take them to this really poor part of the world, they come out telling me how blessed they are.”

In the Mara Region, where Thurmaier and his crews have taken work trips for the last ten years, it’s not uncommon for whole households to live on $2 or less a day. In the last decade, TDS has been able to raise $640,000, through fundraisers like the “Kili Climbs”—Thurmaier’s term of endearment for their trek up Mount Kilimanjaro.

Through this fundraising, TDS has been able to build a dormitory for girls and a resource center for local schools and the surrounding community, including a modern computer lab and a library, which houses 20,000 hard-cover books and 5,300 books in Swahili.  Recently, a digital archive called Project Gutenberg has been installed at the library, which brings an additional 60,000 e-books to villagers’ fingertips. Countless hours of labor and care have gone into these projects, with NIU students, faculty and TDS volunteers doing everything from passing bricks and constructing the building’s structure, to painting walls and organizing materials.

“This is a partnership with NIU,” Thurmaier said.  “The Study Abroad students wouldn’t have anything to do if TDS didn’t raise the money. When we get to Tanzania, the community is the classroom.  We’re with people. The students are busy meeting with executive directors of lots of nonprofit organizations to learn what these people do in their jobs.  It’s been a very intimate, engaged learning experience for both students and volunteers.”

This summer’s climb was the third time Thurmaier led a group up Mount Kilimanjaro. 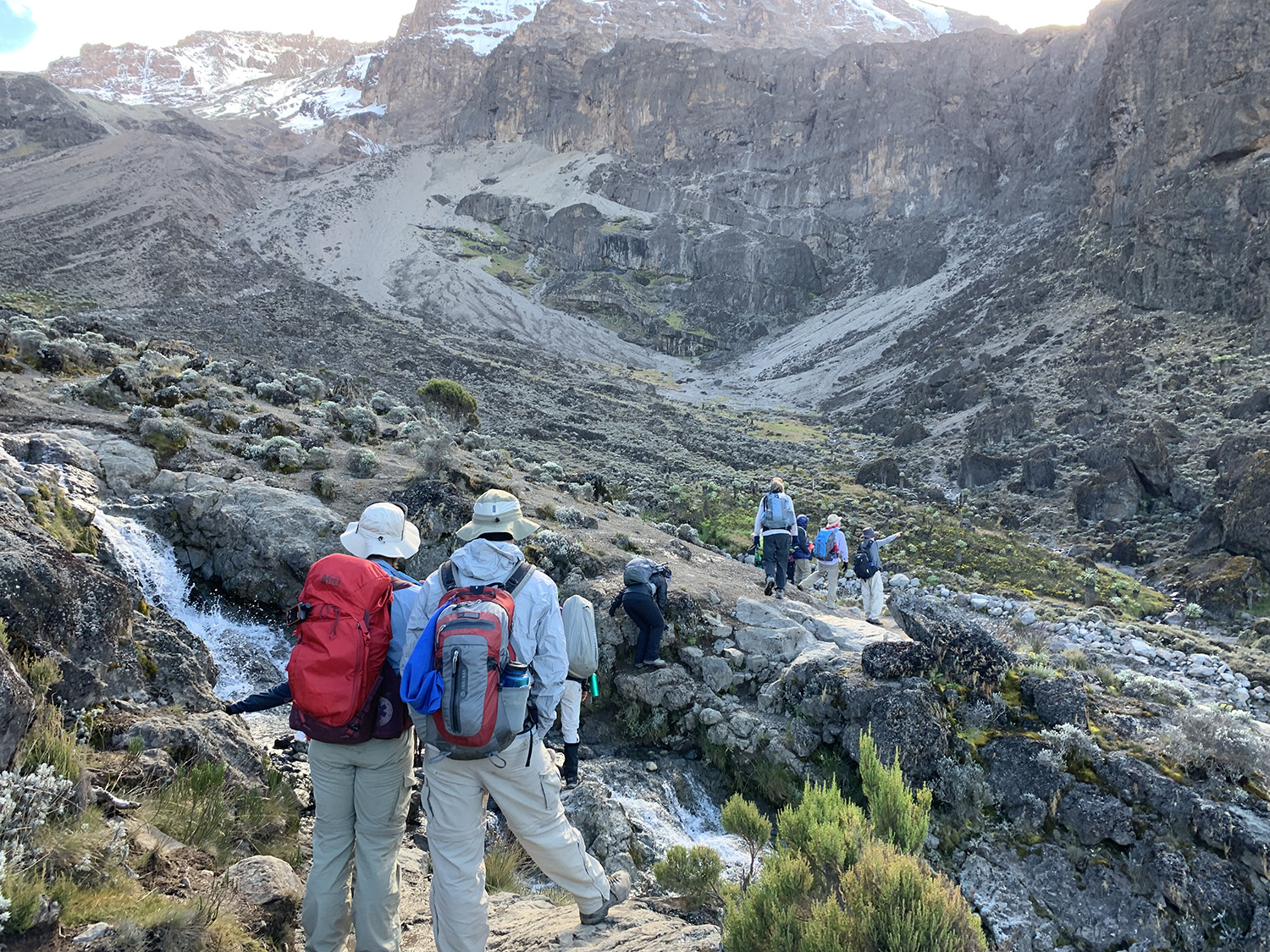 Two TDS volunteer climbers, Ben Blazey and Mary Snieckus, look on as the rest of the group crosses a stream and begins ascending the Barranco Wall.

“This time was really about developing funds so we can further the projects we’ve already started,” Thurmaier said. “Among other priorities, we want to do more teacher training and development, giving tablets to teachers so that they’re able to search the Internet to find teaching resources.  We hope to double the Career Pathways Program we’ve begun for five schools, which is an after-school program that teaches STEM subject matter to students.”

Thurmaier, who will begin his 30th year teaching and his 14th year at NIU this fall, was proud to have several alumni and University staff join him on this particular Kili Climb.  Alumni Rachel McBride (B.S. ’13, M.S. ’16), Jason Michnick (B.A. ’14, M.P.A. ’17), and Frank Turner (B.A. ’11) were quick to join the trip as soon as online registration opened.

“For some reason, I always knew I wanted to travel to Africa, and this organization gave me an opportunity to really get to experience how nonprofits work in developing countries,” said Turner, who originally studied abroad in Tanzania in 2011. “The thing I loved most about the Study Abroad program, and TDS, is that not only I am supporting this amazing and impactful organization, but I get to experience the work that they are doing hands-on. I would highly recommend this adventure for anyone who wants a truly life-changing event.”

McBride earned her degrees in Nutrition and Dietetics at NIU, but when she heard about Thurmaier’s Tanzanian work trips, she felt compelled to be a part of it.  As an undergraduate student, she worked to analyze the Tanzanian boarding schools’ menus for children, and her work showed why the schools’ low-protein food offerings did not support the children’s learning as well as possible.  Because of her research, the schools’ menus were changed. This summer, Rachel came back for the Kili Climb because her first experience meant so much to her.

“Surrounding yourself with movers and shakers who want to see great change in the world is one of the most invigorating feelings,” she reflects. “The energy and ideas Dr. Thurmaier and others in the group brought to development issues in the community was very inspirational to observe.”

While Michnick completed his master's degree, he participated in Dr. Thurmaier’s study abroad program and had a wonderful experience during the trip to Tanzania.  Earlier this year, he took the new role of Executive Director of TDS, and he knew this Kili Climb was a must-do.

“Once Kurt told me that he was climbing one last time, I knew I wanted to join him,” Michnick said. “The Kili Climb has been such a successful fundraiser for the organization, and I wanted to make sure that it was something that continued on. Being my first climb, and Kurt's third, the experience was an excellent opportunity for me to learn how to manage future volunteer trips.”

But the climb can be grueling. Michnick notes that just hours before the team left base camp for the summit, he started to feel the effects of the altitude, saying that the final push to the peak was one of the hardest things he’s done, both mentally and physically. It was only with the support of the rest of the team and their guides that he was able to reach Uhuru Peak.

“The moment of seeing the top while the sun was breaking over the horizon was an amazing experience that I am thankful for,” Michnick said.

Jerry Blazey, NIU’s Vice President for Research and Innovation Partnerships and Physics Professor, also took part in the Kili Climb, along with his two sons, Ben and Sam.

“The three of us have been hiking since my sons were children, and we jumped at the chance to climb Kilimanjaro,” Blazey said. “For me, summiting at dawn was the most memorable part of the trip. The high-altitude landscape was otherworldly, especially in the golden light from a sunrise seemingly below us. The people in the expedition—our fellow hikers, the guides, and the porters—all formed a great, unforgettable team.”

While the trip was successful, there are greater heights still to reach, as TDS continues to help fund development in the village.  If you’re interested in signing up for a trip to Tanzania, a Kili Climb, or just finding out more about TDS, please contact Professor Kurt Thurmaier. To learn more about TDS and how you might donate or support the cause, go to www.tdsnfp.org.